Things are not looking up, but I am. So is the body count. 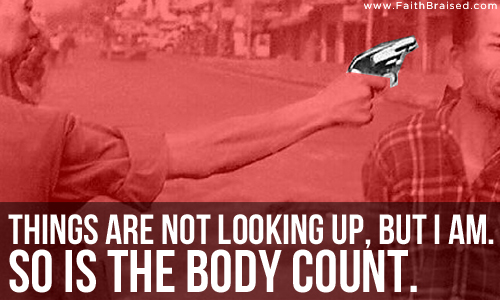 I’m always looking up. When I’m out walking in the neighborhood and especially when I’m someplace surrounded by tall buildings. I look up.

Monday as the news of Las Vegas filtered out, the first thing that came to mind was the 1966 University of Texas tower shootings. I was 14. There wasn’t the intense 24-hour news coverage like we have now, but the news that did reach us was terrifying and transfixing.

Who would do such a thing? Why? Was it really happening? How could it happen? In America!

Thinking about the victims then I was gripped by a sense of helplessness. I don’t clearly remember all of the details, but I do remember that feeling. I’m wondering if that isn’t the impetus to my always looking up.

Looking up. I wonder.

Then came 9/11, demon driven terror plunging out of the sky. Memories of that day in 2001 and the weeks that followed are more vivid than those from 1966. The day after, I stepped into the backyard, and looked up. The sky was so clear and blue. Empty and quiet.

Even now I can’t resist looking up any time I hear a plane going over. I need to see it. To see that it isn’t diving down into the earth.

And now I wonder what it was like in Las Vegas to have hundreds of bullets falling down like a hard rain. Some told how they could feel bits of dirt and debris striking their face, thrown up by bullets hitting near them. Very near them. Shrapnel everywhere.

Many looked up, pointed at the Mandalay Bay hotel. Pointed at the source of the terror falling on them. And ran screaming. Many are still screaming in their dreams and silently in their heads. They will be for a long time.

I don’t own a gun now and have no objections to those who do. I’ve thought about getting one, but it’s not a priority. Years ago I won trophies on the rifle range at Scout camp. It was fun.

For some it seems guns are an obsession. They seem more passionate about guns than most other things in their lives. It’s a weird and desperate idolatry. A crazed addiction of a kind. A sort of paranoia-inducing gunpowder fever. Mad gun disease. Bigger guns! Larger clips! More ammo! Silencers! Bump stocks!

I don’t know a lot about the current gun laws, the lobbying practices of the NRA, or about specifics of different kinds of guns. I know some things and probably should learn more.

But I don’t need to know much to understand that if guns aren’t easily available, when a person goes all broken in their head and heart, when they let evil invisibly take them over, it’s less likely they’ll turn to a gun to do damage.

You can’t use what you can’t get.

There are those who claim it makes no difference if someone chooses a gun or a knife, that if they are intent on killing they will.

But someone wielding a knife has to come down from the 32nd floor, walk into the crowd of 22,000 to inflict pain. They have to bring their evil up close and personal to their victims. Look them in the eyes. 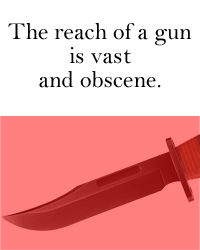 A knife is inherently very self-limiting as to the amount of damage that can be done. You have to hold it in your hand and your reach is limited to the length of your arm. If you throw it at someone, you’re done.

A gun is a different beast. All that limits a person with a gun is how much ammunition they can carry and how fast they can reload. The reach of a single gun is vast and obscene. The Las Vegas shooter had dozens.

Every time there’s a mass shooting, we’re told this is not the time to talk about gun control or related issues. That doing so politicizes a tragic event. Which is an odd claim given that often those trying to talk about it are survivors, or friends and family of those killed.

What I wonder is, what is it going to take? What’s the body count that will trigger the backlash and release the courage needed to reign in this gun madness that infects our nation?

Clearly the death of 18 people and wounding of 31 at the University of Texas wasn’t enough.

Obviously 12 students and one adult murdered at Columbine wasn’t enough.

Evidently the 32 killed and 17 injured at Virginia Tech wasn’t enough.

Forty-nine dead at the Pulse Nightclub shooting in Orlando did not achieve the tipping point either.

You’d think that 59 dead and more than 500 injured in Las Vegas -- and the numbers keep ticking up -- would certainly be enough.

Instead, all that is accomplished is the setting of a new macabre record repeatedly touted in the news.

Get Guinness on the phone! It’s another one for the record books!

A “mass shooting” is when four or more people are killed. According to several sources, in the U.S. there have been 273 “mass shootings” in 275 days so far this year -- more than 1,000 people killed by guns -- and even this is not enough.

Many, taking a cue from the NRA and bizarrely intense Second Amendment firebrands, urge a wait-and-see approach. Just calm down and let the facts be gathered.

Actually, no. We don’t need to wait. We need to act. As far as waiting, enough is truly enough already!

It makes zero difference the type of firearm, how it was purchased, or the motive. Having answers for these questions will be helpful, but they are not required for action. We have all the data and information we need to move, to act, to incite change. Now. 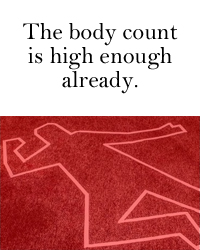 We need action to reduce the number of guns produced and available in this country. We need more stringent, consistent laws that make it tougher for anyone to get and own and use a gun.

It shouldn’t be easier to get a gun than it is to get a driver’s license.

It should be as regulated to own and use a gun as it is to own and drive a car. We need standardized training, mandatory testing, required insurance, a probationary licensing process, annual registration, license renewals and fees every couple of years, photo ID -- the works -- to get and own and use a gun.

Not doing anything is insane. Not taking action is irresponsible.

I agree with Stephen Colbert, now is the time to do something. Do something, “or come up with a better answer. Anything but nothing. Doing nothing is cowardice. Doing something will take courage.”

It’s startling to realize part of why I look up. Out of fear. Fear that was seeded when I was 14 and a madman climbed a tower in Texas. Fear that was fed when towers fell in New York City. Fear that has now been refueled by a guy with far too many guns shooting from high up in a hotel.

It’s a cautionary and not a paralyzing fear. It’s not like the fear generated by gun lobbyists and others that freezes lawmakers into inaction and insensitive excuses when it comes to making needed changes. When it comes to standing up and acting.

The country needs more courage and regulation. Not more guns. There are more than enough guns. Far, far too many guns.

So, while waiting for lawmakers to stand up -- to do what We The People want them to do -- I look up. I look up to scan the windows of the buildings towering over me, and, even though changes were made and it’s much more difficult to commandeer one, to scan the skies and watch the trajectories of the planes above me. And to keep an eye on all those around me vehemently, irrationally insisting they need more guns and fewer regulations.

I look up to God and pray that He will send comfort to the families who have lost a child, a parent, a spouse, a friend -- yet again.

I look up and pray and hope, knowing it will probably take another tragedy, and another, and another, and who knows how many more before lawmakers will find the courage to stand up and act, to push against our country’s gun madness.

In the iconic image heading this post, think of the man holding the gun as the NRA and the other man as the USA. Agree? Disagree? Do you own guns? If so, are you in favor of more regulation? If not, what suggestions -- better answers -- do you have to better manage gun ownership? What ideas do you have for bringing mass shootings to and end? Please feel free to share your thoughts in the comments.
Posted by Stephen R Clark at 12:28:00 PM