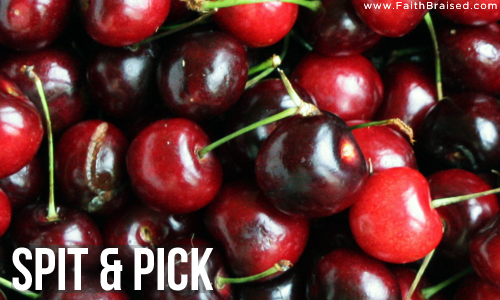 Cherries are delicious, but their pits aren’t. In fact, eating the pits can be deadly.

I knew a young woman who was bright, attractive, and who was repeatedly blessed by her family and friends. Yet, despite the “cherries” she was given in her life, she chose to chew on the “pits.”

How did she view her life? “It sucks!” said she.

Instead of being thankful for having had a car given to her, an apartment provided for her, money given to her, and scholarships that have paid the major part of her college education, she complained endlessly about her life, her “parental units,” her jobs, her friends, and more.

She was blessed with a bowlful of cherries, yet chose to chew on the pits.

Even the most blessed of lives has occasional downsides. Bad things happen along with the good. Our perspective is our choice. We can choose to spit out the pits and pick another cherry, or chew on the bitter negatives.

I’d rather spit and pick.

God’s word says, “The one who offers thanksgiving as his sacrifice glorifies me; to one who orders his way rightly I will show the salvation of God!” (Psalm 50:23, ESV).

Honor God through thankfulness for the good things in your life. Spit the pits. Savor the fruit.

How has God provided for you? Did you enjoy the blessing that your received or complain about what you felt was left out? Share your experiences in the comments!