The bloody persistence of evil, muses begging for their lives & being plowshares

When something emotional is happening on a TV show or in a movie, I’m pretty good at manning-up and stifling any tears attempting to leak out. Usually.

But then I watched the videos of Alton Sterling and Philando Castile dying. Right there on our nice, big, HDTV screen in the safety and comfort of our living room.

Two men, created in the image of God, in the United States of America, died. Shot.

And then there was the news conference with Sterling’s former partner and mother of his son, Quinyetta McMillan, and his now dad-less 15-year-old son, Cameron Sterling, standing by her side. Sobbing.

Cameron tried to stifle and cover his sobs. He couldn’t. He lost it. He sobbed harder and harder. My heart broke. My eyes teared. Even later as I talked to my wife about it, I started choking up.

The bloody persistence of evil

Jesus, shushing his disciples who were complaining about the “waste” of expensive ointment a woman of the street was anointing his feet with, self-righteously claiming the money could have been given to the poor, said, “For you always have the poor with you, but you will not always have me” (Matthew 26:11, ESV).

Every so often during a casual discussion about poverty or some other persistent evil in the world, I’ll hear someone say with a dismissive sigh, “Well, like Jesus said, we’ll always have the poor around.” What they really mean, but probably would deflect admitting, is, “What’s the point of even trying to fix [the problem]? No matter what we do it’s always going to be there!”

In other words, they’re completely misunderstanding and misapplying the words of Jesus.

His point in the context of the statement wasn’t that the poor, or any persistent evil in the world, should just be ignored. Rather, at that specific moment, the woman was focusing on Him and the neglected duty of the host of the event. What she was doing and the expense involved were appropriate for that time and place.

We should be resisting them. Not ignoring, validating, or participating in them.


He shall judge between the nations,
and shall decide disputes for many peoples;
and they shall beat their swords into plowshares,
and their spears into pruning hooks;
nation shall not lift up sword against nation,
neither shall they learn war anymore.

The same imagery is found in Micah 4:3.

The imagery in these passages isn’t just referring to the need to lay down arms. That’s the negative action. It’s also pointing to a positive action. The imagery of plowshares and pruning hooks, farming implements, calls us back to the beginning and to the garden.

In the beginning, we were made to be in relationship with God and each other, and placed in the Garden of Eden to care for the earth.

We were made to be productive and fruitful (plowshares), not to be hateful and destructive (swords).

Certainly the Fall changed everything. God’s image in us is marred. We have persistent evil in the world, such as poverty and violence.

But we also have more.

Created precious in His image

As a child who grew up going to church, I was taught a little song intended to teach us the value of human beings. You’ve likely heard it: “Red and yellow, black and white, they are precious in His sight. Jesus loves the little children of the world.”

Kids are adorable and easily viewed as precious. Then we all grow up and become adults. The cuteness wears off and for some reason the preciousness is devalued. Why?

I keep going back to a quote by Francis Schaeffer:


“All men bear the image of god. They have value, not because they are redeemed, but because they are God's creation in God's image. Modern man, who has rejected this, has no clue as to who he is, and because of this he can find no real value for himself or for other men. Hence, he downgrades the value of other men and produces the horrible thing we face today — a sick culture in which men treat men as inhuman, as machines. As Christians, however, we know the value of men.”

Whenever I post this quote on a social media platform, it gets lots of “Likes.” I’m not sure those liking the quote are fully clear on what Schaeffer is saying, or why I’m posting it.

The point is that, red or yellow, black or white, all men and women matter and are precious in His sight. All have value simply because of God’s image in them, and deserve to be treated with respect and dignity. This is true no matter what. Their ethnicity, religious views, political leanings, or skin color makes no difference. They bear the image of God and have value.

All men, all people, all human beings, all the time bear the image of God and have value.

And, sometimes, because it’s the bigger elephant on the news and in our streets, we need to focus a little more pointedly on the truth that black lives matter*.

When all our muses are begging for their lives

I’m tired of the empty argument that “guns don’t kill people, people kill people.” The simple truth is that the fewer weapons there were, the less killing would occur. Guns tend to empower violence.

It’s also ironic to me that those militantly adamant about owning guns for “protection” claim they would never shoot another person. So, are they protecting themselves against lions, tigers, bears? What?

Truly, choosing to own a gun for protection is little more than deciding you are willing to commit premeditated death-dealing. Killing is killing whether in self-defense or not.

Given what’s going on in our country right now, paranoid NRA-inflamed arguments over rights isn’t what we need more of. Not even close. Especially if we are people of The Gospel.

I came across a poem a man named Danez Smith wrote and posted on BuzzFeed. These stanzas I’ve lifted from the longer poem are stunningly telling:


being black feels like a lot right now.
they shot a man then they shot
the people mourning the man.
***
i’d be lying if i said i wasn’t scared. every word
i say translate to farewell.
***
it doesn’t feel like a time to write
when all my muses are begging
for their lives.

Six years ago I was pulled over by a cop who drew his gun on me. He had been directing traffic into a mall over the holidays. I thought he’d waved me in. He claimed I intentionally tried to hit him.

As the encounter unfolded, I realized that if I basically didn’t just shut up, he might shoot me or at the least arrest me. Three years later, in an eerily similar situation, he did shoot someone. The officer was black as was the man he shot.

This happened to me once. For many black men, it’s an oft-repeated experience. I can’t even imagine living under such a weight of endless suspicion. It should not be so for anyone.

For everything there is a season, and a time for every matter under heaven

Instead of defaming victim’s memories over past indiscretions, it’s time to mourn with the families left behind. Instead of working so hard to find minutiae that we believe justifies the killing of a human being created in God’s image, it’s time to die to ourselves and lay down our lives for those who are hurting.

It’s time to weep and beat our verbal swords into plowshares. It’s time to be healing salt and light in this sin-darkened world.

Jesus taught that those poor in spirit, those who mourn, the meek, those who hunger and thirst for righteousness, the merciful, the pure in heart, and the peacemakers will be blessed. That turning cheeks was better than taking up arms. That vengeance was not ours to execute.

We need more plowshares. There are way too many swords already. Enough.

This post may seem a bit disjointed. If so, I apologize. I certainly don’t feel that it’s all that eloquent. Writing is as much a way for the writer to sort through their own feelings and thoughts as it is to influence others. Strong emotion tends to blur the brain. And then there are those tears that well up, making it hard to see the page. I hope you get the points I’m trying to make. And I hope against hope we can find ways to care about each other more and about our right to bear arms less. How do you feel and think about all that’s going on in our country? Are you feeling hopeful or hopeless? Please share your thoughts, kindly, in the comments.

*Note: I want to clarify that there is a difference between the sentiment (concept, idea, philosophy, however you wish to view it) of black lives matter and the "official" organization called Black Lives Matter. I am not referencing the organization. 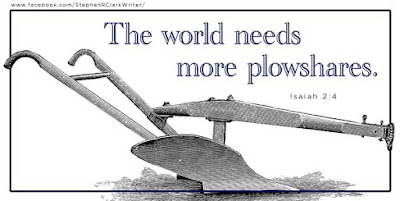