Spattered throughout scripture is the idea that, on this earth in this life, we are merely sojourners.

Even “aliens and strangers” moving about on this God-breathed world (1 Peter 2:11).

Or, put a little more bluntly by Jesus, we are well cared for “leaves of grass,” here today then withered and tossed on the fire tomorrow (Matthew 6:30).

The point being made is one that we often don’t truly get or even care about until, well, the end is nearer than we’d like.

That point is simply this: life is transient and temporal.

Every one of us will die. Some sooner than others. And all by various means and ways.

Because this reality has been thrust brusquely upon our family in the past few days, I’ve been contemplating, among other things, the idea of “hospice” as we’ve been practicing it.

The literal definition of hospice is intriguing:


hos•pice (hŏs-pĭs)
n.
1. A shelter or lodging for travelers, pilgrims, foundlings, or the destitute, especially one maintained by a monastic order.

2. A program that provides palliative care and attends to the emotional and spiritual needs of terminally ill patients at an inpatient facility or at the patient's home.

(The American Heritage® Dictionary of the English Language, Fourth Edition)

When the two proffered meanings are blended, as I believe they should be, the truth that surfaces is that, in a sense, we are all engaged in hospice, both as givers and receivers of care.

We are all earth-sojourners seeking hospice -- shelter, care, lodging -- day in and day out.

My mother-in-law, Ann Laub, a vital and head-strong woman that I’ve known only a few years, went to the hospital some days ago. Her complaint was an ankle gone awry. At 81 going on 82, it doesn’t take much to send a body into a deep hurt.

Sparing some of the finer details, she came out of the hospital after a couple of weeks straight into home hospice.

As you can guess, many other factors were at play. But still, it took all of us varying degrees of time and depth of pondering to move past “But it was only a sprained ankle!” to the hard reality that it is much more.

I think we are all still working it out in our heads and hearts. But the result is the same no matter what.

The weight of life is bearing down. And it hurts.

Walt, husband and father, attends also, sorting through all that’s happened and happening, working hard to make sense of it all while being there by her side. His is a difficult and arduous task despite appearances to the contrary. My heart breaks for him, and them.

Others of us, connected by blood or marriage, are here as best we can be. Alternately stepping in to help or moving out of the way as needed. It’s a kind of a dance with awkward steps we’re all trying to learn meaning toes get stepped on at times.

There is nothing about this that is not hard. And for each, it’s hard in different ways only each can understand and parse. None can tell another how to feel, how to think, how to go through this.

After all, a family is a unit made up of different individuals. Even shared experiences are colored and made infinitely personal in the hearts and minds and memories of each one.

That’s the way of life.

And life, as death, can be messy. All the hurts and hopes, mistakes and successes, good decisions and bad, trials and joys of life still crowd in at the end, demanding a place, seeking to be heard, wanting to be acknowledged, or perhaps forgotten. Definitely, forgiven.

As in life, at death tempers flare, love surges up, tears fall, hugs are given or shunned, misunderstandings erupt, and memory recalls lighter, brighter, happier times as laughter inexplicably bubbles up out of deep sorrow.

This is the awkward dance of life.

Today the dance has taken a turn as Ann’s breathing seems to be fading. Everyone has gathered.

After a few bumpy turns on the dance floor, things settle into a whispered vigil.

Dad works on his crossword from the morning paper. One washes dishes. Another updates the notes for the nurses. And someone else cleans. All are working hard in their own way.

Besides the labored breathing, there are the random exclamations. Ann is nearly simultaneously lucid and not. Deciphering her meanings is as complex as working out a difficult crossword.

How long this will go on is anyone’s guess. Right now, just about everything’s a guess.

Much of life is a guess. But there are certainties. God’s love and grace is assured to those who are his children.

Jesus taught that in giving shelter, clothing, a drink of water -- hospice -- to another fellow sojourner, it was as if we gave it to him (Matthew 25:35-45).

Service rendered in love to the helpless is a miracle of grace. Especially when the helpless and those serving are a little head-strong.

Jesus comforted his disciples assuring them of their place in his kingdom and in heaven. “Do not let your hearts be troubled. Trust in God; trust also in me,” he told them, and then explained that he was going ahead to make preparations.

“Where is it you are going?” they asked.

He told them they knew the place and pointed them in the right direction saying, “I am the way and the truth and the life. No one comes to the Father except through me” (John 14:1-11).

Paul writes in Romans that those who “confess with your mouth, ‘Jesus is Lord,’ and believe in your heart that God raised him from the dead, you will be saved” (Romans 10:4-14).

But what if, some may fret, I’m coming to all of this late, near the end? Not to worry. Again, schooling his disciples, Jesus said, “But many who are first will be last, and many who are last will be first” (Matthew 19:25-30).

Spiritual hospice is always available to the living, even when near the end of our journey.

Ann is ready even though some may not be.

In addition to ministering to Ann’s needs, the daughters also managed to prepare a simple supper. In response to an earlier more lucid request, a dear relative brought the key ingredient for crab cakes.

The freezer was raided for some side veggies. Sundry leftover sweets were gathered from the refrigerator. And the table was beautifully prepared with places for everyone but Ann.

One of the many care workers available at a moment’s notice, Joe was a wonder. Calmly, with humor and sweetness, he spoke softly, answering myriad questions while at the same time tending to Ann’s needs.

Every concern was gently and thoroughly addressed. Every person was acknowledged. Every expended effort by the family was praised.

Finally, after repacking his bag, he asked to pray with the family around Ann’s bed. Grateful, we circled, held hands, and were humbled as Joe prayed with sincerity, and tears.

Joe understood that this was hard.

Something I’ve learned about the concept of family is that the meaning and the members shift over time for many reasons, some joyful and some painful.

Death, romance, marriage, birth, adoption, divorce, re-marriage, betrayal, distance, friendships, feuds, and more all impact the family unit. Add to that the connections and severings between and among extended family units.

It can get very complicated at times.

What I’ve also learned is that families are resilient, in their parts and on the whole, and there is always room for new members. It always takes a bit of adjustment on everyone’s part, but the love always grows to embrace the new additions, no matter how they come in or how long they stay. It continues even when some turn their backs and walk away.

Which leads to the most important thing I can say about my family: In all its permutations, I love my family. Whether immediate or extended, here or departed, each part and each person is special and valuable and dear to me. I have been blessed with a great family and a great heritage.

This most recent permutation of my family, where I have been adopted by virtue of marriage to BethAnn, has been and is a joy. The Laubs have taken me in and extended living hospice to me. They have made me one of them and because of that I am in awe.

Ann has been a key part of that acceptance.

One of the best Christmas gifts I’ve ever received is an Emily Dickinson doll. Ann had noticed a joking reference I’d made to the doll on Facebook. Seeing the doll when I opened the box cracked me up, which was exactly the reaction she was going for. Of course, later, so Emily wouldn’t be lonely, she got me the Will Shakespeare doll. Both are proudly displayed in our home.

The day is nearly done. The sun has set. Ann is still sojourning with us and we continue to provide her hospice. We will miss her, but in this experience we will gain a new appreciation of her and of each other.

And this comes to mind:

'Death has been swallowed up in victory. Where, O death, is your victory? Where, O death, is your sting?' The sting of death is sin, and the power of sin is the law. But thanks be to God! He gives us the victory through our Lord Jesus Christ. Therefore, my dear brothers, stand firm. Let nothing move you. Always give yourselves fully to the work of the Lord, because you know that your labor in the Lord is not in vain” (1 Corinthians 15:50-58).

Hospice is the work of the Lord.

“[D]o not worry about tomorrow, for tomorrow will worry about itself. Each day has enough trouble of its own” (Matthew 6:34).

Yes, today was enough for today.

What are your experiences with losing a loved one or providing hospice? What helped? What didn't help? Please share your thoughts in the comments.


UPDATE: Ann passed quietly on Tuesday, July 1, around 4:30PM surrounded by ALL four of her children (which was a special blessing), her husband of 55 years, a grandson, and a son-in-law.There was a brief memorial service on Monday, July 7th at 1:00 PM at The First Presbyterian Church in Springfield, 710 Bethlehem Pike, Flourtown, PA 19031 (www.flourtownpres.org).

The family asks that donations in Ann Laub’s name be given to the Abington Hospice Fund Development, 1200 Old York Road, Abington, PA 19001.

NOTE: It was two years ago on July 2 that the family lost Bill Jack, husband of Debra, just a month after their daughter, Lindsey, was married. The photo of them below was taken during a breakfast for the wedding party. We're all wondering what Bill and Ann are talking about together right now. 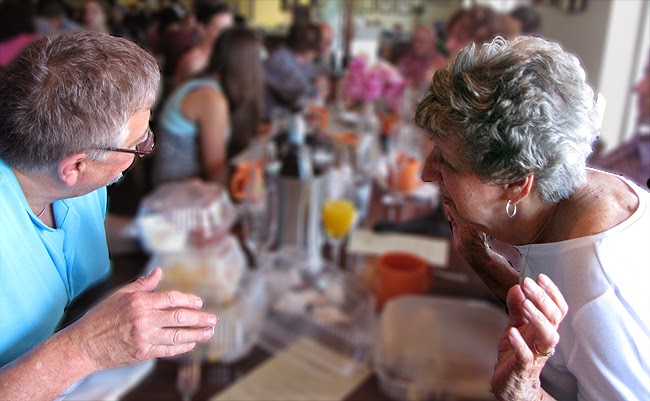