At night, look up.

Somewhere out there, past the stars, past the comets and satellites, past all you can see, at the edge of where your imagination can touch, there exists a distant small planet called Spreadlandium.

There, a cheerful alien race busy themselves, day in and day out, crafting delicious and wonderful edible spreads.

And they have all manner of the most irresistible spreads you can imagine.

They are wizards at making jam-ish and jelly-like ooey gooey spectacular tasting spreads out of nearly anything edible.

Their vast arsenal of nuttery buttery spreads is out of this and every other world!

If you meet the J’ly Jambeyns they will not harm you. In fact, they are more than happy to share with you samples of their many delicious spreads. As many samples as you care to try.

But, while these joyful creatures are gifted in the making of magical spreads, they have nothing upon which to spread their spreads that is tasty and satisfying.

Sadly, they don’t know how to bake. They have no clue what to do. There is no idea of bread in their heads.

Because they have nothing on which to spread their spreads, they enjoy their own spreads using spoon-like dippers. Or with the juicier spreads, they suck them up through straws.

While the spreads are always tasty, nothing on which they spread them ever is. Especially not their fingerish appendages.

And this made them sad.

So they sent out a search party in a saucer-shaped spaceship to find something flat and tasty for their spreads.

For years and days and months and weeks, exploring through galaxies one planetoid-ish rock at a time, the J’ly Jambeyns searched. But sadly always came up empty handed. Or, in their case, empty hand-ish-like-thingy, since they don’t have hands like ours.

But they searched on, boosters blasting their saucer shaped craft, a pinball full of life and longing, crisscrossing space and time, searching, tasting, and searching some more.

Through the galaxies they zipped and zoomed, landing here and there, butterflies of hope and curiosity, putting spreads on, well, all sorts of flat stuffs.

They would taste test whatever crispy crunchy flat things they found -- brown leavish things, crunchy stony things, plate-like buggish things, and other flat things they never spoke of again once they spat them out (Yuck!) and rinsed their mouths with a cleansing minty spread.

Ever the more carefully.

Ever the more hopeful.

One day, the J’ly Jambeyns came to earth. They landed in a small town, in a big back yard, behind a grassy knoll, near little Suzy.

Suzy was sitting outside on a sunny summer day leaning against a tree reading her new book.

She was enjoying a cold glass of milk with a plate of peanut butter and grape-jelly-laden saltine crackers her mother had made for her as a snack.

As she was munching and humming and reading and watching the buzzing bees tickle the flowers, there came a different, much deeper buzzing from somewhere above her head.

Suzy looked up just as the saucer flashed by and curved behind the near distant hill, out of sight.

Then mumbly jumbly voices giggled, sang, and quizzed in the air right into Suzy's ear. She could not make out what the voices were saying but knew they were coming closer.

Up from behind the rise oddly shaped things began to grow silhouetted against the bright sun-soaked sky.

Suzy squinted as these things became taller, bouncing up and down, and then realized they were creatures ambling up over the hill toward her.

They were odd little creatures who were also the source of the giggling voices that were jibbering joyfully in a language she did not recognize.

She sat motionless as the creatures approached.

The creatures saw her and froze.

Their eyes, bouncing and squinting on stalks above their heads like wind-bobbled sunflowers, ogled her and then spotted her peanut butter and jelly crackers, including the half-eaten one Suzy held in her motionless hand.

Their bumbulating eyes opened wide and round as softballs.

Then they all held their breath as they nudged their leader.

A brave brightly dressed J’ly Jambeyn approached Suzy smiling. Although she didn’t know that it was smiling. What she thought was its mouth looked liked a squiggly line, which was how Jam J’ly Jambeyns smiled.

She wasn’t afraid. Just really, really curious about them. As were they about her.

The J’ly Jambeyn leader came close to Suzy, extending a tentacle arm thingy at the end of which was a very prettily and delicately decorated open container of a most aromatic spread, the scent of which was already tantalizing Suzy’s button nose and making her mouth water. 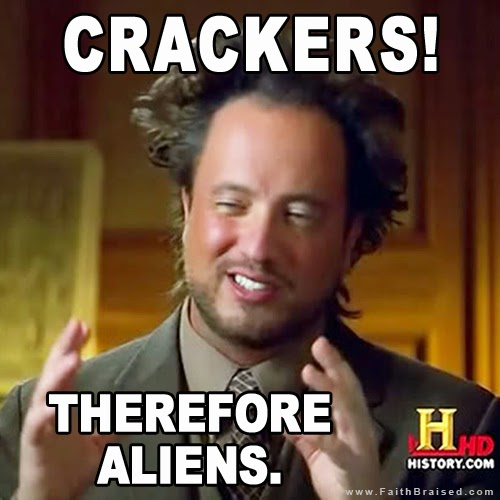 As one tentacle arm thing held out the jar of spread, with the other, one fingerish appendage extended, the leader J’ly Jambeyn pointed at Suzy’s crackers and made a series of sounds that seemed to be a question.

Suzy guessed it wanted to trade from the way it was gesturing at her plate.

“Okay!” she said and smiled and passed the plate of crackers to the J’ly Jambeyn with one hand while accepting the gift of spread with her other.

The J’ly Jambeyn excitedly began sharing the plate of crackers with its companions.

First, they tasted the crackers with the peanut butter and grape jelly.
“Mmmm ummmm hmmmm munch munch,” they all mumbled as they tasted cautiously.

Next, they scraped off the peanut butter and grape jelly and put their own nuttery and jelly-like spread on one of the cleaned crackers, passing it around for each to sample in delicate, judicious nibbles.

Then they put other spreads on the other crackers and passed them around for more delicate sampling.

Suzy thought the “Whatta!” sounded like a lot of people shouting, “Hurrah!”

For the first time ever in eons and eons the J’ly Jambeyns had found something tasty on which to enjoy their delicious spreads.

They immediately knew that these whatever-they-were would work as edible transports for every kind of delicious spread they had every concocted or could ever imagine concocting.

They were amazed and joyful, deliriously ecstatic. And then quizzical and questioning.

All at once and all together they wondered where they could get more of these whatever-they-were spread transports.

As one, they turned to Suzy who was slurpishly sampling the gift spread with her fingers.

Suzy looked at them as she thoughtfully licked her fingers clean of the most amazing jelly-like spread she had ever tasted, trying to understand what the J’ly Jambeyns were saying as they all now pointed and repeated, “Mmmmfff thhhhfft oooo oooo oooo?”

All at once the most stupendous thing occurred.

Instead of “Mmmmfff thhhhfft oooo oooo oooo?” Suzy heard as clearly as the birds chirping in the green-blazed trees “Where can we get more of these crispy spread supporters, whatever-they-are? They are very truly tasty and worthy of our delicious spreads. We would eagerly with much joy like to acquire many billions of them.”

“You mean crackers,” replied Suzy. “You can buy them at the grocery store. But I’m not sure they have billions. I think you’d have to go to the big bakery for that many.”

All the J’ly Jambeyns eyes bobbled up and down wide open as each realized they could understand Suzy. It was a complete and delicious surprise to them.

Somehow, the tasty treats they shared freely with each other had given them the ability to talk to each other. They could communicate! And communicate they did.

The J’ly Jambeyns were so excited they all started singing and dancing and clapping their tentacles in overwhelming frabjous joy.

While Suzy could understand every gleeful word they sang, to anyone else passing within earshot, it would have sounded like nothing more than a bunch of children giggling in a sing-song kind of boisterous silly giggling.

Suddenly they stopped and quieted and stared at Suzy again.

In unison, they sang out enthrallingly, “We love crackers! Take us to the grocery store and then to the big bakery please! We will give you many containers of delicious spreads in trade for many, many of your delicious crackers!”

With that, Suzy and the leader J’ly Jambeyn, hand in tentacle hand-ish thingy, headed off toward the grocery store, followed by the rest of the J’ly Jambeyn crew.

The J’ly Jambeyns had never been as happy as they were that day. They made up on the spot and began singing rhapsodic songs about their delicious epic discovery of crackers.

As they all paraded joyfully down the street toward the store with Suzy, neighbors standing in their yards stared, stunned, pointing, mouths open in amazement.

Meanwhile, a caravan of large black official looking cars with darkened windows sped toward the raucous scene and the oblivious, unsuspecting Suzy and the alien panoply.

* It’s flash fiction Friday! (To learn more about FFF, click here and scroll down.)
Flash fiction is nothing more or less than a very, very short short story.
This one is a tad longer than others I’ve shared at just over 1600 words. As I was working on it, it dawned on me that all children’s stories are, in a sense, flash fiction! Interesting.
Anyway, this could probably use some work. And based on what little I know about writing children's stories, it’s probably too long for a children’s book. But, here it is just for fun for you!

So, what do you think happens next? Are the cars a welcoming committee? From the government and intending to take the aliens captive? Maybe corporate moguls hoping to cash in on the alien’s talents? Or perhaps they are executives from the History Channel looking for source material for another alien special. Let me know what you think in the comments!