Wheel of Fortune contestant tangles tongue and loses … *nothing*

**THIS IS A RANT ABOUT SLOPPY REPORTING
IN THE NEWS MEDIA.***

A few nights ago (9/17/13), Paul Atkinson, a firefighter from Oregon, experienced an epic fail gone viral while a contestant on "Wheel of Fortune."

He badly fumbled the pronunciation of the puzzle, “Corner curio cabinet.” What came out of his mouth was barely intelligible, even to him after the fact. 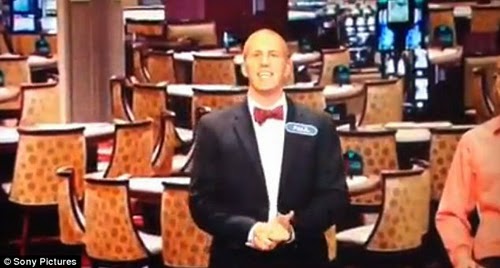 Anything he had gained during the round was lost when the next contestant did a better job announcing the puzzle's solution.

What did Paul lose? He lost an opportunity to potentially win one million dollars. He had landed on the coveted space during his spin.

Now, here is the heart of my rant.

All day, as I scanned the various news channels, and then later in the evening on the local news, this is what was being reported when this story came up: "Player loses a million dollars."

Sadly, Paul's flub was his mispronunciation rather than a bad spin and that’s what’s drawn the unusual attention. It’s only barely newsworthy, if at all.

But he still did *not* lose a million dollars, because he could not lose what he had not yet won.

Why does this bother me so?

If those in the news media cannot accurately report such a simple, straightforward, easily verifiable story as this, how can we trust them to get the bigger, truly important stories right?

There is no excuse for not getting this one right. If those reporters assigned the story weren’t familiar with how “Wheel of Fortune” works, they only needed to turn to their colleague in the neighboring cubicle, nab a random stranger on the street, or simply phone a friend. This was a story for which there exists a sea of sources.

To say, “Oh, it’s no big deal because it was just a puff piece,” is nothing short of excusing sloppiness and laziness. Every botched story, whether fluff or substance, erodes credibility.

So, to you, Mr. and Ms. Reporter, if you can’t be trusted to get the little things right, then why should you be trusted to handle the bigger stories; the really complex, important stories?

Why should I watch your news channel or news program?

Why should I buy your newspaper or news magazine?

Why should I turn to you for any information, particularly information that could have a serious impact on my life?

I shouldn’t, nor should others. We will look around and find those who are doing a better job.

Paul Atkinson did *not* lose a million dollars. But every news outlet that reported he did lost something far more valuable -- a big chunk of credibility. The more epic fail is theirs.

Do you think this is a big deal or not? Have you spotted errors in reporting, whether in broadcast or print media? Share your opinion and examples in the comments!