Making things simple is smart; simplistic is for simpletons

I’m not a big fan of puzzles, but used to do them as a kid with my mom. One of the first things we did was sort the pieces by color. Then, constantly referring to the picture on the box cover, we’d select pieces with colors that matched the various areas of the image. Soon, we had a completed puzzle!

By sorting pieces by color, we were making a complex task simple. An essential element of effective writing is to make the complex understandable.

In this election year, some spinners go further by attempting to take complex issues, squeezing the context and meaning out of them, and turning them into simplistic slogans. This is usually done with an opponent’s message in an attempt to discredit their ideas or actions.

Simplistic views the audience as simpletons

A lot of simplistic messages are posted to Facebook and other social media outlets hourly. One popped up the other day that caught my eye: 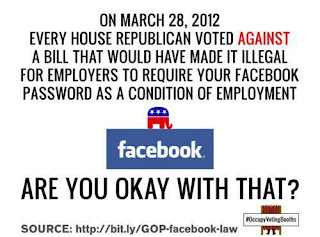 The more complex context behind this simplistic banner can be found in articles such as, "House votes down stopping employers asking for Facebook passwords." Sadly, while this article offers a little more depth, the title and its slant are also a tad misleading.

The problem with the Facebook posting is that the bill itself didn’t address the issue of employers requiring passwords. Only the amendment to the bill did. But even then, the wording of the amendment did not make the practice illegal.


“Nothing in this Act or any amendment made by this Act shall be construed to limit or restrict the ability of the Federal Communications Commission to adopt a rule or to amend an existing rule to protect online privacy, including requirements in such rule that prohibit licensees or regulated entities from mandating that job applicants or employees disclose confidential passwords to social networking web sites.”

The amendment merely leaves open the door for the FCC to create a new rule or amend an existing rule that would make it illegal for employers to require job applicants or employees to share their passwords.

The reality is this door is already open without the amendment making the amendment essentially useless.
This is the problem with simplistic: It takes truth and bends it into untruth, yet retains the appearance of truth.
What’s left is a lie.

In other words, simplistic is deceptive.

It also implies that the intended audience consists of gullible simpletons who won’t be able to see through this truth-faking shenanigan.

Big, multi-faceted ideas, issues, and topics can be overwhelming. Grappling with complex information can feel like drinking from the proverbial fire hose.

Issues like world hunger, national debt, local homelessness, doing your taxes, and more if taken on as a whole can be emotionally and mentally crushing. There are so many pieces to take into consideration it can become difficult to impossible to grasp the full picture.

This is where simplicity comes in.

Making something simple does not ignore context or complexity. Rather, it involves breaking the whole into manageable pieces. This is something we do every day.

Instead of heading to the grocery store to shop for whatever, we prepare a list of what we need. This makes the bigger idea of “grocery shopping” more manageable and probably less expensive.

When planning a large event, instead of trying to do everything all at once, we break down the project into chunks. Individual tasks on a timeline simplify the preparation without compromising the integrity of the event.

The same is true when simplifying an idea or concept.

An excellent example is the recent Kony 2012 project. This is an effort to bring global attention to atrocities committed in Africa by Joseph Kony. The effort was kicked off with a gripping video that went wildly viral in a short amount of time.

The group behind the video, Invisible Children, has been criticized for over-simplifying a very complex issue. Their response is simply that it’s better to do what you can than to do nothing at all.

What their critics miss is that their initial video was intended to bring attention to the issue. That was its simple goal at which it succeeded very well. Once they gained the world’s attention, they pointed people to lots more detailed information regarding the atrocities.

The Kony 2012 campaign made it simple to grasp the horror of a terrible situation. It made getting involved accessible to everyone; each person can do as much or little as they are able.

The effort is anything but simplistic. The context of the issue is not being distorted and no element of the truth is being ignored.

However, through simplifying the larger message, millions of people of all ages all over the world were able to wrap their heads around the essential details.

The initial video brought clarity to a complex issue without sacrificing the integrity of the message and without insulting the intelligence of the audience.

Presenting truth in a simple way is a powerful and effective communication technique.

Keep it simple but not stupid

This is the essence of writing simply about complex topics. It involves breaking down the components into easily digestible pieces.

But one thing that Strunk, White, and Zinsser would never say is to “strip every sentence of essential truth,” or write in a way that distorts the bigger message in order to make it fit small minds. That’s the essence of turning big ideas into simplistic slogans and Facebook postings.

Simplistic writing strips away truth in order to deceive, while simple writing organizes the truth into manageable chunks in order to bring clarity.

Good writing keeps it simple, but doesn’t make it stupid.

Email ThisBlogThis!Share to TwitterShare to FacebookShare to Pinterest
Labels: messaging