Sell me your salsa and no one gets hurt!

My wife, who is always looking to do something nice for me, recently brought home a new brand of blue corn tortilla chips. It’s one of those “down home” brand of products that includes a folksy little story on the back of the bag about how mom and pop got into the business. 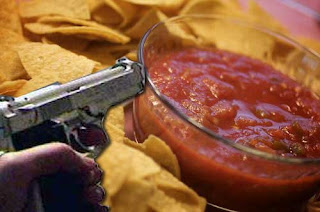 Usually, these stories, often clever and endearing, are meant to create an aura of a homey business run by nice people who are just like you and me. But this one had a slightly ominous twist to it.

It seems the business got its start in salsa with the chips coming later. Of course, the salsa was made with loving care in the back of a small rural restaurant (rural is implied).

This fresh salsa made from “only the most expensive ingredients” was once only available with your dinner in the restaurant.

That is, until Mr. Big walked in. And this is where the story gets a little dark!


You don’t mess with Mr. Big

This nameless man is identified as “the president of an upscale supermarket chain.” He was apparently a bit of a thug because what happened when he tasted the salsa is nothing short of shocking.

Like an armed robber in a bank ordering money from a teller, this Mr. Big, according to the story on the bag, apparently confronted the owners, and in their words, “demanded we package it for his stores (emphasis mine).”

I’m sorry, but I have just a slight problem believing that he demanded the salsa be packaged for his stores. If that’s truly the kind of guy he is, he’s probably a jerk to work for!

I’m guessing a more accurate word might be “insisted.” Or, something like, “enthusiastically encouraged” them. But I really don’t think he thuggishly demanded anything.

You’re wondering, “So what?”


I don’t believe the story is an accurate representation. Which means it’s essentially a lie. Just like the claim that they still mix their salsa in 5 gallon buckets. These exaggerations don’t ring true and so the story becomes less effective.

Good compelling writing, even on bags of chips, does not mean you exaggerate, embellish, or in any other way alter or misrepresent facts. When you do, you damage your own credibility and weaken your brand.

Now, if this little bag tale had been cast as a folksy yarn which implies its loosely based on fact but has been stretched for humorous affect (wink, wink; nudge, nudge) then, okay. That’s different.

But that’s not the case in this instance. The essay is written in a serious, but semi-warm tone, clearly being presented as a factual bit of company history.

This makes all of the company’s claims suspect. It raises a tiny, gnawing doubt about the quality of their products. If they’re willing to stretch the truth on their story, can we be sure the ingredients list is 100% true? Are they really “all natural” ingredients? Do these chips really contain no cholesterol or tans fat?

The point is that good writing must be precise, accurate, and truthful. Period.

Stretching the truth may seem like it creates a stronger story, but it actually threatens to weaken your brand and sour your customers. Just don’t do it.

Postscript: I emailed the company in question regarding the use of the word "demanded" and claiming to make their salsa in five gallon buckets. Here is the response I received the day after my inquiry:

Regarding the wording you mention, you're probably right, it is a little clumsy to say he "demanded" that we package it for his stores, but the sentiment was honest and heartfelt--intended to convey a little bit of his sense of enthusiasm. As for still making our salsa in 5-gallon buckets, I can verify that that statement is absolutely true. We simply haven't found a way to make it in large batches and still preserve our breakthrough flavor. It's a little harder that way, but we think the results are worth it.

Hmmmm. I'm still just a tad skeptical about the buckets, but it seems they are telling the truth! A photo of the "buckets" in action would help alleviate disbelief. As for "demanded," I hope they change the wording going forward.