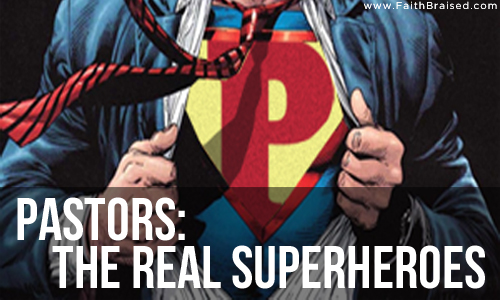 These are the ones who come most quickly to mind. I’m surely forgetting a couple.Who are they? No, not members of a rock band, although they all rock. They are a few faithful pastors who have had or are having an enduring positive impact on my life. I love these guys.

Pastors -- the good ones -- are unsung superheroes. Seriously.

I’m a church kid. Well, not so much a kid anymore, but what I mean is that I essentially grew up in church. Really. We were at church a lot and I liked it. Most of the time.

Every Sunday morning we went to Sunday school -- there was a class for all ages. Then came morning worship. This involved a lot of singing from the song book and a special or two.

Then the pastor preached. Boy did he preach.

Sunday evening we were back again for the “evangelistic” service. While similar to morning worship, the attitude was more casual. Still, there was a lot of singing, more preaching, and always the altar call.

Some nights it got pretty raucous. Good times.

We also had a midweek service on Wednesday nights. And the periodic revival weeks when we were there every night, often pretty late, even on school nights.

Outside of “church” at church, there was almost always something going on, some reason to be there. Youth meetings, Boy Scouts, pitch-ins, Vacation Bible school, committee meetings, choir practice, worship band rehearsal, Christmas play practice, and so much more.

At the hub of all this hubbub was the pastor, Brother Davidson. All of the adults were “Brother” or “Sister.” Brother Davidson (Paul) was my first really memorable pastor. He seemed to be always around no matter what was happening at church. If he wasn’t in the office working on a sermon he was puttering around the building fixing this, cleaning that, touching up the paint on a kid-damaged wall. Still, he always had time to listen to a heartache, to pray for a need.

After Brother Davidson moved on from pastoring and I had moved out of town, he taught Old Testament at a small Bible school in one of the Dakotas. Years later I ran into a man, a professor at a prominent East Coast seminary who had been a student of Brother Davidson. We both had great, fond memories of him. Small world.

Just a couple of years before he died, Brother Davidson reached out to me in a letter with encouragement having heard, somehow, about challenges I had encountered. Even decades later, he was still my pastor. He was a good man. As are all of the men named at the beginning of this post. I call them superheroes because what they do is, if you stop to really think about it, epic. Few other jobs require such a wide diversity of skills and knowledge and crazy hours. Not to mention a bottomless sea of patience.

Just doing sermons every week is daunting. I know, because I’ve preached a few times. (Emphasis on few.) Sermon prep alone could kill you if you let it.

Once, while in the midst of working on a sermon, I mentioned to someone how hard it is. Their response was, “Well, that’s the difference when you don’t have the anointing.” Yes, that was not encouraging in the least. But I let it go.

Sermon prep is hard. Every pastor I’ve talked to says so. It’s a labor-intensive endeavor as well as soul-challenging. Even when it goes well it has its frustrations.

Consider this. Imagine how hard it is to labor so lovingly and painstakingly to bring the Word, to do it faithfully, and with the hope that it will change hearts and minds, bending them more toward God’s will. You know, hoping against hope that there will be transformation in the lives of those hearing these sermons.

Sometimes it happens and the change in people is evident. Often it doesn’t.

Still, week after week, our pastors do the work and we are blessed. Even when we’re clueless.

It has to be incredibly tough, following a service, to have people come up to you with a complaint, a grievance, an annoyance. The sanctuary was too cold. The music was too loud. The sound system was popping. And on and on. With nary a nod toward the message.

Some will even go so far as to complain, right then, right there, about some point with which they disagreed. Usually these complaints arise from conviction that should be prompting a much different response.

And so it goes, week after week. The Word is given, brilliantly, yet the words fail to penetrate hearts a little on the hard side and minds that barely crack open.

Every time a truth finally penetrates my rebellious head and seeps into my sinful heart, I grieve that it took so long. That it took years and years of hearing great sermons, of being blessed by the faithful ministry of really good men, before I finally got it.

But I’m also thankful that they all kept preaching and teaching until the Word broke through. Thank God!

So, to all you pastors, the good shepherds, the faithful laborers, my apologies for being dense and stubborn and distracted.

Forgive me when I’ve failed to thank you for your service, when I’ve complained about something petty, when I’ve clearly behaved counter to the Truth you’ve diligently preached. In other words, when I’ve been a foolish, wandering sheep.

Thank you for your faithfulness, your humility, your travails. For your love and relentless caring.

How many pastors have had a positive impact on your life? Did you let them know? Do you view any pastor, past or present, as a kind of superhero? Why or why not? What do you think makes a good pastor? Please share your thoughts in the comments! 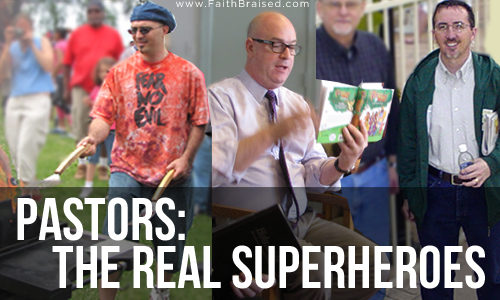