In Carson McCullers’ classic novel, The Member of the Wedding (Mariner Books; Reprint edition), the main character, Frankie (aka F. Jasmine) who is primed for a change in her life, wonders out loud why she can’t just change her name and be new. Her caretaker, Berenice, responds:

“Because things accumulate around your name,” said Berenice. “You have a name and one thing after another happens to you, and you behave in various ways and do things, so that soon the name begins to have a meaning. Things have accumulated around the name. If it is bad and you have a bad reputation, then you just can’t jump out of your name and escape like that. And if it is good and you have a good reputation, then you should be content and satisfied.”

Everyone has a history marred by sinful actions. Some were things done to us. Many, if not most, were things we did to ourselves. They were results of choices that were often poorly thought out.

There are a million ways to sin. And for each sin there are millions of potential consequences.

These real consequences are the scars we bear that, this side of heaven and unlike guilt, no amount of redemption will completely erase.

The little Pentecostal church I grew up in often had visiting evangelists pass through to conduct “revivals.” A favorite story cropped up in many of their sermons. It was meant as a cautionary tale warning us of the indelible consequences of sin. It went something like this.


There was a little boy who loved to hammer nails into wood. His father’s hobby was woodworking so there were always scraps of lumber. These the little boy was free to hammer in all the nails he wanted.

One day, the little boy was in a hammering mood. He had lots of nails but there were no scraps in his father’s workshop. So, he began driving nails into a large lovely piece of wood. He thought only a few wouldn’t be a big deal.

Caught up in his hammering, he lost track of time until he heard the voice of his father cry out, “Son! What are you doing?”

Startled, the little boy stopped hammering. “Dad! I’m sorry! There were no scraps and I only meant to hammer in a few nails! I can pull these out!” exclaimed the son.

“Okay,” said the father, visibly upset. “You pull the nails out and then come in for supper.”

Supper was very quiet that night. The little boy was afraid to say a word. After supper, his father said, “Come on, son. Let’s go out to the workshop.”

There, they stood looking at the wood. The little boy burst into tears. “I’m sorry father! I didn’t mean to! I pulled all of the nails out! Can you forgive me?”

The father looked lovingly at his son, picked him up in his arms, and spoke softly, “Yes, son, I forgive you. But there’s something you need to understand. Look at the wood.”

They both stared at the wood now filled with holes.

“Son,” said the father. “That was a very expensive piece of wood. I bought it to make your mother a special chest for her birthday. Now, the wood is ruined. Even if I fill them with putty, the holes will still be visible. Just like scars.”

When we come to Christ, confess our sins, and repent, we are promised a new name in heaven and to be washed white as snow. Both of these are true. As Christians, our names are indelibly written in the Book of Life and God sees us, thanks to the imputed righteousness of Jesus, as clean. Holy without holes!

But here and now, on this earth in this life, it’s not quite the same, as McCullers’ character Frankie was learning. When we’re a stinker, the smell often lingers. Especially when our stinkering involves others who have that annoying habit of remembering. With some, it seems like every time they see us they point, hold their noses, and cry out, “Foul! Foul!”

I know this is true because there are people who have hurt me that only have to come to mind for some reason and my heart cringes. I remember the pain, the betrayal, the lie, or whatever the foul behavior was that caused a rift. Fully forgiving is hard.

I think this is why Jesus counsels us to forgive “seventy times seven.” It’s not that the person isn’t forgiven the first time, but rather that our own hurt needs to be healed and rehealed. Our forgiving them again and again brings healing to our own hurt hearts.

Probably it should also spark in our understanding the truth that others who have been hurt by us go though the same process.

None of us are untouched by the sin of someone else. We have all been both burners and burned, both hammer and nail.

Sadly, I feel more holey than holy most of the time. I’m sure I’m not alone in this.

The scars -- or holes -- we bear are to serve as reminders, not accusations. It’s not about piling on guilt, on ourselves or anyone else. We must not be about ruining reputations, or getting even, or cowering in shame.

Instead of pointing at each other’s holes, we need to help fill and cover them. Instead of judgment, the borne scars need to draw out from us love, grace, and acceptance.

Toward those who have hurt us, recognizing our own capacity for wounding, we must go easy. Forgive, and when we are unable to forget, extend even more grace. And as we do unto others, we must do to ourselves.

This is not easy. It’s hard. But it’s the love that’s required.

This is not love made of emotion that we grunt and strain out of ourselves. This is true love fired by the Holy Spirit that is reflective of our True Love, Jesus. It’s love that loves even when it doesn’t feel like loving. It’s an expansive and wide love that speaks to the broadness and bigness of our God.

None who are repentant should feel the need to change their names to get away from who they’ve been or are. Instead, we must help each other move toward what we each are to become, what we are designed to be. To help the old in all of us become new.

In Frederick Buechner’s novel, Godric (Harper & Row) the main character asks, “What’s friendship, when all’s done, but the giving and taking of wounds?” This brings to mind a well-known verse about how we are often iron sharpening iron (Proverbs 27:17).

Even when our intentions are good, we hurt one another, especially those closest to us. This is the nature of sin in us. It will come out one way or another. We are all well-barbed and susceptible to one another’s barbs.

But the Godric quote can also be taken differently. We can bear the burdens of others by taking on their wounds. By standing with them in their pain and embarrassment of failure or folly, rejection or ridicule -- whatever the misfortune was or is -- and shore them up. Just as we hope others will do with and for us.

The scars we bear do not have to be badges of dishonor. If we are children of the Most High God, they should not be. They must not be. Especially when confession, repentance, and renewal are involved.

Likewise, we must not be giving out scarlet letters to all those we know who have sinned and come short of the glory of God just like us. Discernment may be ours, but judgment is not.

When the Holy Spirit opens our eyes to discern the pain in the hearts of another, our only response as Christians is to love, to forgive, to embrace, to stand alongside.

See Proverbs 10:12, Proverbs 17:9, and 1 Peter 4:8. Do you feel mostly holy or mostly holey? Why? Are there things you’ve done that you regret? How have you dealt with these? Are there times when instead of accusation, others stood with you? When you stood with others? Share your thoughts and experiences in the comments. 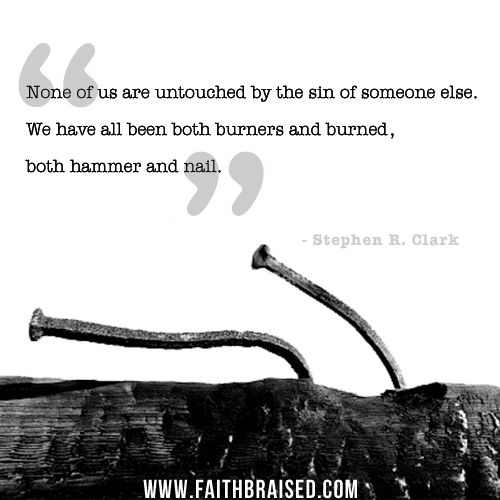