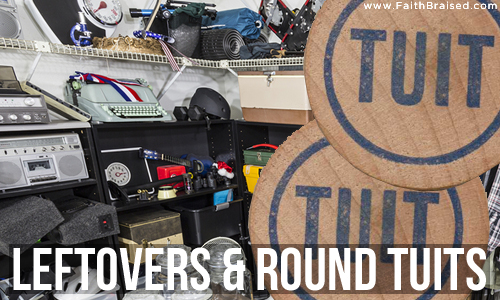 As a kid, when something in our house stopped working as it should, became a little worn,  or fell out of fashion, someone always asked, “Do you think the church could use this?”

This is how church closets become cluttered with not-quite-totally-useless stuff. While all things are new at home, the old heads to church.

Malachi 1:14 cautions, “Cursed be the cheat who has a male in his flock, and vows it, and yet sacrifices to the Lord what is blemished. For I am a great King, says the Lord of hosts, and my name will be feared among the nations” (ESV).

When we donate second-hand leftovers to the church and then buy ourselves a new replacement, aren’t we kind of doing the same thing? Sacrificing what’s blemished?

Or, how about when we volunteer to take on a task at church and then do it when we get around to it? Or do it in a rush at the last minute, not giving it close attention? Or even blowing it off altogether, claiming it’s not really as important as other things in our life?

We all have a sort of “buyer’s remorse” after volunteering, wondering why we said yes out loud when we were saying no in our heads. It happens.

But isn’t God supposed to get our first fruits rather than our leftovers?

If Jesus had only half-died on the cross forgiving us for just a few of our sins whenever He got around to it, we’d be in a real mess.

When we commit to do something for the church -- the Body of Christ on this earth -- we need to give it our full and best effort.

Have you ever promised to do something for church and then failed to follow through? What was your justification?

NOTE: For the past several and for the next few weeks, Tuesday’s post will be a brief two-minute devotional. Think, “Tuesday Two-Minute Devotional” or “Two-Minute Tuesdays” or something  along those lines. ;-)
Posted by Stephen R Clark at 6:00:00 AM