In the fall of 1972, I was a junior in college, frustrated with the Vietnam War, and growing increasingly leery of the then President Nixon. I was not a politically minded person at all, but I felt compelled to take a closer look at things.

The upshot was that this conservative Pentecostal Hoosier hayseed who grew up in a Republican home became attracted to George McGovern. Gasp!

Looking back, I guess in some ways he was the Bernie of the times. I wasn’t completely comfortable with everything he stood for, but instinctively knew our country needed a change from what we had.

I got involved on our small Christian campus with the brave, the few, the proud who were rooting for George. My family would not be pleased, but hey, I was in Missouri and they were way back in Indiana. Plus my involvement was mostly in stealth mode.

Sadly, through a series of fumbles, McGovern’s star faded and Nixon headed into a second term. A term that, despite some bright points, ended disastrously. Which was kind of the way I felt about my first venture into political involvement.

While the results of the ‘72 race were disappointing, the lesson I learned was to keep an open mind and think outside the party. In other words, instead of voting a straight ticket, I discovered that the better choices may be one from column A, two from column B, and maybe even a couple from column C.

Evil is as evil does, lesser or not

Since then, while I’m no political savant, I’ve tried to become a little more politically savvy. Sorting through the hubbub isn’t easy but it is worthwhile. Sometimes the candidates I like win, often they don’t. In the Presidential category, the best choices seldom make it past the primaries.

When the primaries throw up a “nope and noper” and the third-party options are “meh,” choosing one to vote for is not fun. It’s not always so much choosing a “lesser evil” because often they aren’t really evil. It’s a matter of choosing the lesser “nope.”

This year, however, for me, both major party choices were beyond “nope,” beyond merely “bad,” and registered on the political “evil” scale.

Of course, by evil I don’t mean like a Hitler or a terrorist or kale or a serial killer are evil. It’s more along the lines of a serious lack of integrity, major character flaws, exhibiting horrendous judgment, showing clear signs of bigotry or arrogance, activity that borders on or leaks into illegal, or other “bad fruit.”

The two major party candidates that survived the primaries this year bore “bad fruit” by the bushels full. The leading third-partiers were just mushy and generally unpalatable. That is, until Evan McMullin got into the game late. He showed promise.

The bottom-line was that I could not vote for either Donald Trump or Hillary Clinton. Instead, I decided to write-in in someone else, and did. Basically that means that once the primaries were done, no matter who won the election, all I had to look forward to was disappointment.

Still, while I was and am frustrated (and probably will be for some time), I am not in despair and do not feel utterly helpless. I am discouraged and disappointed. I’m disappointed in my fellow Christians who chose to support Clinton, and especially those who chose to support Trump. It’s disheartening and baffling at the same time. But, I will not lose faith or hope.

Come on people now, smile on your brother (& sister)

In my lifetime, I have survived 11 presidents and am now gearing up for number 12. They are Eisenhower, Kennedy, Johnson, Nixon, Ford, Carter, Reagan, Bush, Clinton, Bush, Obama, and now Trump.

Reading that list I’m sure you will have your reactions to each one. Ones I’m fine with you may hate, and vice versa. That’s the way it goes for those of us who are citizens of these United States. You and I don’t always get what we want. One of us will always be disappointed.

This year, in this Presidential election, once the primaries ended, there was no way I was going to get what I wanted, short of a miracle. That said, all I can do is live with what we now have. And I have to do that within the boundaries of my biblical worldview.

That worldview tells me this is not “the end” and we can get through this together. If we choose to do so. Of course, on all sides, it will require grace, forgiveness, patience, forbearance, love, and several truckloads of kindness.

To those who are on the “winning” side experiencing joy, please be patient with those on the “losing” side. The margin that has put you where you are is very slim and there’s little to gloat over. So, be patient as those who did not get what they’d hoped for vent, process, and mourn their loss. This was a long hard nasty ordeal and there’s no switch that can be flipped to just simply turn off the pain of loss. It’s going to take some much deserved time before healing can begin.

To those who are on the “losing” side experiencing shock, I ask the same with some tweaks. Don’t let anger, hate, rage, despair, and all the dark emotions of life devour you. Cry it out and take the time you need to resettle your heart and mind. And then come back to fight the good fight some more. But fight it with love in your heart, not resentment. We need you at your best.

We have all been here before

As I said earlier, it was heartbreaking when McGovern lost. When Nixon fell, that hurt, too. But I survived and so did the country. Hopefully, some things got better.

America is a big wacky dysfunctional family. Every four years it’s like trying to get everyone to come home for Thanksgiving dinner and then maintaining peace at the table. It doesn’t always go so well. But, for better or for worse, we’re still family.

Losing hurts, but it does get better. Hate is not a good option. There’s still a lot of good work to be done. Perhaps that’s where we should channel our energies, regardless of who is or isn’t in the White House.

Things may be bad, but I don’t want to do anything that will make them worse. I want to move forward in hope. What about you?

Oh, and feel free to identify the references to certain songs if you caught them ;-) 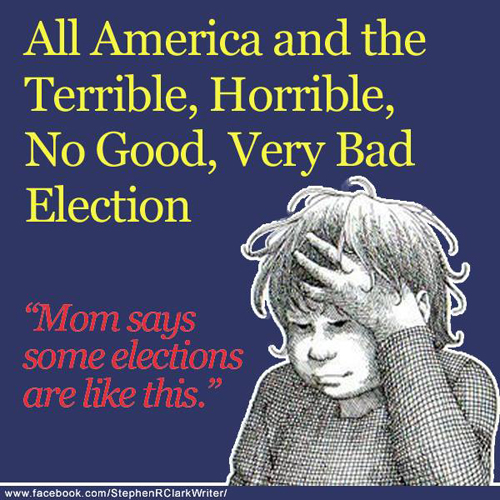