“Our lives depend on this election.”

So says a woman quoted in a CNN report. It’s also the essence of the sentiment I’ve seen many express in various ways on social media. Especially by Christians, people who claim to believe and trust in God, the creator of the universe.

While I have my concerns and am sorely disappointed by the candidates regurgitated out of the primary process, I’m not desperately worried.

Why? Because I really do believe and trust in God. If He can manage to maintain the universe I’m sure whatever happens after November 8th will be a piece of cake. Things may get ugly here on earth, but the earth is not my ultimate home.

It’s the ugliness we see that tends to distract our eyes and hearts and minds away from the beauty of God and the future for which we should be longing.

We don’t see God, but we do see men and women who claim to be able to fix the ugliness. Especially the ugliness that most effects us. So we take our eyes off of Jesus, glue them to this or that candidate, and that’s how the idol worship starts.

God fades as the ugliness gets uglier and the promises get more inflated (mostly with truthiness).

Soon, character no longer matters. We want what we want and we’ll be damned if we’re going to get it and get it our way! Bring in the wrecking ball!

When God acts, stand back!

Remember Elijah and the prophets of Baal? If you spent any time in Sunday school, odds are you’ve heard the story. The people were divided in their loyalties, so each side set out to prove their god was the God and make their land great again by being better together.

The goal was to invoke fire from heaven to burn up a sacrifice. Winner takes all.

The Baal boys danced and pranced and whooped and hollered. For several hours 450 “prophets” carried on, cutting themselves, yelling, desperately pleading for Baal to send down fire. It was white-knuckled hysteria. Nothing happened.

Then Elijah steps up. He calmly takes charge and orders that the sacrifice, the altar, and the ground around it be drenched with gallons of water. It’s a lot tougher to get wet wood burning! But Elijah wasn’t worried. He prayed a simple prayer and POOF! everything -- the sacrifice, the wood, the stone altar, the dust -- was burnt to nothing. No white knuckles or hysteria needed.

The message was simply that God is the only god and He will defend Himself on His terms. He is in charge.

Doing damage to the Kingdom

On October 7th I Tweeted, “Christians supporting Trump are destroying their own credibility when it comes to professing Christ & laying claim to biblical faith.”

The next day I Tweeted, “The more ‘Christians’ defend Donald, the more obscene he becomes, the more stupid Christians appear & the more reasonable Hillary seems.”

Then, on October 9th, I wrote this on my Facebook Page:


IT’S TIME TO LET IT (the election) GO

If Christians believe that God is truly on the throne, that He really does hold all things in His hands, then fretting over this or that candidate to the point that character is ignored, that morality is dumbed down, that “opponents” are belittled, that fellow-believers are forsaken, that persistent wickedness is ignored, and more -- all this is sin. Plain and simple.

God doesn’t need our help to enact His will. He doesn’t ask for our help. Rather, He asks us to trust Him, to glorify Him, to live in a manner that is godly and attractive to those around us (in the sense that we point others to Him).

After prayer and biblical consideration, vote or don’t vote as your Spirit-influenced conscience directs you.

But don’t compromise your values. Don’t live for the insulting zinger. Don’t belittle those who choose differently. Don’t insist that voting a certain way is an absolute requirement to saving our country (We’re in trouble no matter how the election goes!). Claiming or doing such things damages our credibility as a Christian, demeans the faith, does damage to the Kingdom, and denies the sovereignty of God

In the end, no matter what happens “He is before all things, and in Him all things hold together.”

Let go of the election, drop the arguments, end the rants, stifle the reactionary-ism, resist the counterattacks, and “ do not be anxious about anything, but in everything by prayer and supplication with thanksgiving let your requests be made known to God.”


In the days following, others began to express similar sentiments. But still, the hysteria continues. Especially among those supporting Trump.

In fact, it’s getting so absurd, the Clinton supporters just need to sit back and watch the meltdown.

By the way, I won’t vote for either of them.

This is just a metaphor but there’s a message

Let’s go back to the Elijah vs. Baal story and use it as a metaphorical model to drive home a point.

Imagine that on the Baal side of the story are the Trump supporters. Then that means the Elijah side are the Clinton followers. The Trump horde is making more and more racket, becoming more and more frenzied, trying to force a result in their favor.

Meanwhile, the Clinton side smiles and chuckles and goes about their business.

God’s not pleased with either of these camps, but I’ve got a feeling the votes are going to reign fire in favor of Clinton. Just saying.

Many Trump supporters insists they’re only supporting Trump’s policies, not the man. They declare, “I vote on policy. I won't be to blame if she's elected.” Their posts consistently express outrage toward Clinton as well toward those who are saying they will vote third party or not at all. They see that as giving a sure win to Clinton. It infuriates them.

Of course, on the other side, Clinton supporters say the same thing about non- and third-party voters, that it’s giving Trump a sure win.

Such is the insanity our blind irrationality has created.

As Christians, our allegiance is never to a party, a candidate, or even a country. All of these are temporal and will vanish like haze on a sunny day. Our allegiance and loyalty must be aimed at God and God alone. Anything else is idolatry.

When we keep this straight in our heads and hearts, panic doesn’t set it when the ugliness around us rises up. The uglier this world gets, the more beautiful He should appear and the less we should fear.

Trump won’t save us. Clinton won’t save us. The American flag, guns, democracy, a wall, or the military won’t save us. But all of these can destroy us if we lose perspective and forget Who is really in charge. If we put any one of these above or even alongside God -- as in believing and crying, “God, guns, USA, and freedom!”  -- it is heresy and idolatry.

Not only do we damage ourselves but we set a very poor example for those unbelievers around us. If we claim to serve God yet don’t really appear to trust Him to take care of things regardless of how elections go, or when we defame those fellow Christians who disagree with our politics, why should our unbelieving neighbors pay any attention to the Gospel we seek to share? What’s better about it? What’s different?

If you are a Christian and you really believe Hillary Clinton or Donald Trump or someone else is “God’s choice” say that and only that and then shut up. God will defend Himself, regardless of who ends up on the Supreme Court.

Start living the faith you claim to hold.

How tired are you of the campaigning? What can we as Christians do going forward to raise up better candidates? Are you planning to vote or stay home? Write in someone? Please share your thoughts in the comments.

BTW: If you’re wondering where I stand regarding the elections, Russell Moore says it best: “Should Christians Vote for the Lesser of Two Evils? Even at the ballot box, morality is not relative.” 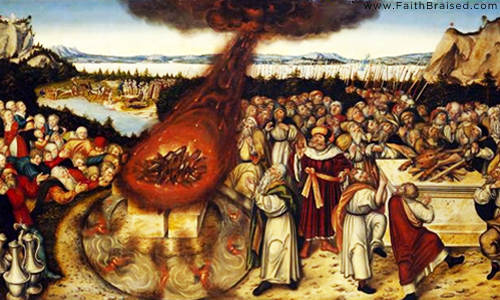