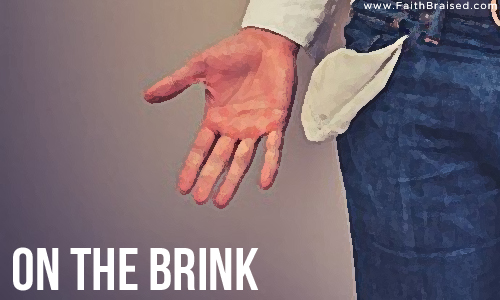 The job I’d had for two years suddenly evaporated. I was out of work, several states away from family, and totally on my own.

Despite sending out dozens of resumes and going on several job interviews, nothing was jelling. What little money I had was dwindling fast and my fridge was pretty empty. I felt like I was teetering on the brink of homelessness!

I was on the train heading into New York City for yet another interview. At one of the stops along the way, Jack, the singles pastor from the church I attended, got on. He worked in the city and was taking one of his daughters in for the day as well.

We sat together and chatted. At the last station as we parted, Jack grabbed my hand, said “God bless you, brother!” and took off. Slowly I realized that I was holding something. I looked at my hand and there was money! Near tears, I unfolded three twenty dollar bills.

“I could eat this week!” I thought as tears welled up in my eyes and Jack’s blessing warmed my heart.

His word declares, “It is the LORD who provides the sun to light the day and the moon and stars to light the night. It is he who stirs the sea into roaring waves. His name is the LORD Almighty....” (Jeremiah 31:35, New Living Translation).

God will provide for your needs just in time. And then He will use you to provide for someone else!

How has God prodided for you just when you needed it? Have you "paid it forward" and helped someone else? Share your experiences in the comments!