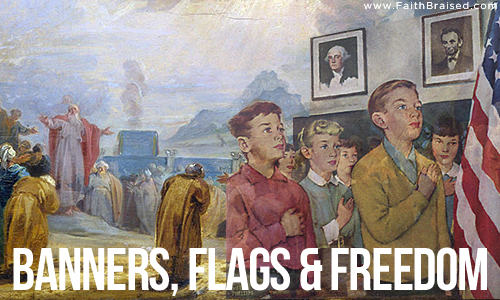 After defeating Amelek, “Moses built an altar and called the name of it, The Lord Is My Banner” (Exodus 17:15, ESV).

In biblical times, a banner or flag was used as a rallying point. As they wandered in the desert, each family of the Children of Israel had a unique banner. These banners helped keep them organized and focused.

In battle, the flag was used to rally the troops and lead them into battle, as well as to mark won territory.

As school children we pledged our allegiance to a flag. Politicians campaign in front of large banners bearing slogans and promises. We adorn our homes with seasonal flags and banners as entertaining decorations. We declare support for our favorite sports teams with flags bearing their colors.

Throughout our lives, banners and flags declare our interests, intentions, concerns, promises, loyalties, and more. While some to whom we offer our loyalties come and go, one remains above all others.

Unlike the failed slogans and programs of politicians, God’s promises and love remains steadfast. In the Song of Songs 2:4 it states about God, “...his banner over me is love” (NASB). He is both rallying point and covering.

Flags, banners, and more declare our allegiances. They can also serve as sources of inspiration and encouragement as we move through the challenges of life.

Under whose banner are you rallying?

Where do your loyalties lie? To whom or what are you pledging your allegiance? Are you placing your faith in something or someone transitory or eternal? Share your thoughts in the comments.