In 2 Kings 6, the servant of Elisha awakens, steps outside their abode, only to discover they are surrounded by the army of the king of Syria, who is not happy with Elisha.

You know that scene in “The Blues Brothers” where Jake and Elwood are finally cornered by the police in the Chicago county assessor’s office?

Picture that but with spears and swords instead of guns.

What the servant sees is an impossible situation with no way out. None. Kind of like the proverbial rock and a hard place scenario.

But Elisha knows better. Elisha knows there is more to the situation than meets the natural eye. And, by the way, I’m also pretty sure 2 Kings 6:19 is the inspiration for the great Star Wars line, “These aren’t the droids you are looking for.”

In Daniel 3, another dire situation builds up. King Nebuchadnezzar has a grand golden image of himself made. It’s a big, tall, shiny statue to which he then commands everyone in his kingdom to bow down and worship, or else. The penalty for refusing is death by fire. you probably know the story.

Shadrach, Meshach, and Abednego, servants of God, said no. They knew God’s command against worshipping idols, nature, or men. They also knew the consequence of defying Nebuchadnezzar.

For choosing against what they could see and choosing for what was not visible, they were tossed into the fiery furnace. There they were joined by the Invisible Who became visible in that moment, and the three came out of the furnace unharmed and without even the smell of smoke on them.

What Elisha, Shadrach, Meshach, and Abednego understood is that when confronted with evil, there is always a better (not necessarily easier) way. Always.

On July 7, 2016 I Tweeted, “Faith leaders bending reason like a pretzel to justify support for either candidate casts deep shade on their biblical exegesis skills.”


Right around the time of my Tweet, dozens of alleged evangelical leaders threw their support behind Donald Trump. Since then, other “notable” Christian leaders have issued further passionate arguments urging Christian followers to vote for Trump or Clinton.

All of these are making the fatal error of believing there are only two evil choices. That their preferred candidate is the “lesser” of those evils. And that choosing “wrongly” will doom America, and by some accounts, throw the whole world into chaos.

I fear for the souls of the men and women making these arguments. They seem to have lost touch with the God they claim to serve and are falling into a form of idolatry. They’re also doing damage to the reputations of every believer and to the Christian faith.

Neither Clinton nor Trump are saviors of anything.

God’s ways are not our ways, or the naturally seen ways

This summer our church has been looking at the attributes of God. Our pastor is covering them in his sermons and we’re diving a bit deeper in our adult Sunday school class. This past Sunday we looked at God’s wisdom.

The simple truth is that God is all-wise and that all true wisdom comes only from God. We as His children can tap into the vast expanse of His wisdom (James 1:5).

The practical application for us when seeking to act in wisdom is to aim for what most glorifies God. If a choice we makes does not glorify God, then it simply is not a wise or good choice.*

Based on all I’ve observed and read, the arguments being made by evangelical leaders for supporting either Trump or Clinton have nothing to do with glorifying God. Rather, they have everything to do with addressing personal biases, selfish motives, agenda-laden assumptions, dire forecasts, and a lot of fear.

For example, probably the single most cited issue is related to Supreme Court Judge nominations. The simple argument is that we can probably survive four (or God help us, eight) years of a “lesser evil” but will suffer for decades if they leave behind the wrong people on the big bench.

So, therefore, we must “help” God get the right “lesser evil” into the White House to ensure we get the “right” people in the Court.

What this entire argument neglects is, at minimum, a couple of really important points:

One more point to consider is that no one (other than God) can predict what any elected candidate will do once in office. It is a fact that every President has reneged on campaign promises. The promise to close Guantanamo which hasn’t happened is a recent example.

Why the post-election shift? Once in office, the perspective changes. Reality takes over. Minds rethink. Real motives emerge. New pressures come to bear. And, too often, the promises were nothing but lies to begin with.

There is zero guarantee that either candidate will make “better” Supreme Court appointments than the other will. Frankly, I don’t trust either of them. But that’s just me.

Eschewing the mark of every beastly evil

Revelation 13 reveals there will be those at the end of time who sellout to a “lesser” evil and align themselves with a beast of a leader. They gain food and lose their souls. I’ve always wondered how they would be so easily convinced to be marked. Given what’s happening today, I’m beginning to understand.

So what are we to do? How do we make a wise decision as to who to vote for?

Well, first, we should all be doing what we all should always be doing, and that’s steeping ourselves in God’s Word.

If you call yourself a Christian but aren’t reading the Bible daily, then you need to just shut up about who to vote for. Seriously. You have nothing of value to say. At least not to or on behalf of Christians.

As for the Christian “leaders” trying to sway people to pick from one of two evils, they need to examine their motives, lay aside agendas, and take a fresh look at God’s word.

As I stated above, the best decision will center on “what will most glorify God.” This is especially true when there is no specific Bible verse to lean on for the decision.*

At the very least when you’re looking for godly advice and solutions, you need to turn to godly resources and people.

To help, here’s a little mnemonic I shared with the Sunday school class using the word “wisdom” to help lead to better solutions and decisions:

I - Information. Gather data from reliable sources. Get the real facts and cull out the spin.

S - Study. Review the information you’ve gathered. Fill in gaps. Verify and validate your sources. Again, cull out the spin.

D - Discern. Lay down personal biases, wants, desires, fears, hopes, preconceived notions, and seek to truly discern God’s will. This is a critical step that requires familiarity with the Bible and a relationship with Jesus.

O - Observe. Look at the situation in light of your information to see if it fits, if it still makes sense. Be willing to have your mind changed in light of newly encountered facts.

M - Move. Make a decision and move forward in faith, listening to God as you go, seeking to always bring Him glory.


Attempting to achieve godly wisdom without an ongoing relationship with Jesus activated by the Holy Spirit and seeking the mind of God in prayer is futile.

Here’s where I’ve come out on this

I cannot predict what a person will or won’t do in the future. As I’ve mentioned, once in office, the perspective changes and intentions shift. But I do know the revealed character that both major party candidates, and others, have presented up to now. Like the Bible makes clear, by their fruits we can glimpse their hearts. I can only act on what I can see right now.

Because of what I’ve seen and discerned, I cannot support either Hillary Clinton or Donald Trump for President. These are not the candidates I’m looking for.

But I will vote.

For me, the best argument I’ve come across has been presented by Russell Moore (Should Christians Vote for the Lesser of Two Evils? Even at the ballot box, morality is not relative).

Moore dispels the myth that our only choice is between the two major party candidates, affirms our responsibility to vote, and points to the options of writing in a viable candidate or voting for one of the third party candidates. He also reminds us that there will be other people and issues on the ballot needing our attention.

He explains, “When Christians face two clearly immoral options, we cannot rationalize a vote for immorality or injustice just because we deem the alternative to be worse. The Bible tells us we will be held accountable not only for the evil deeds we do but also when we ‘give approval to those who practice them’” (Rom. 1:32). 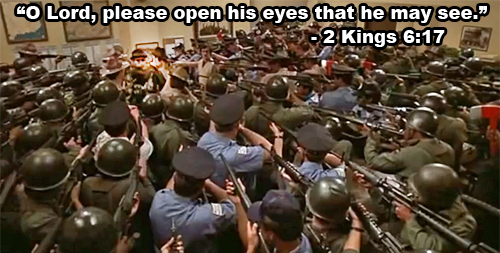 As did Elisha, Shadrach, Meshach, and Abednego, I know God is not limited, especially by a two-party system that’s badly broken. The choices may not be readily visible to the natural eye, but they’re there.

As the three Hebrews explained to Nebuchadnezzar, things may get hot and uncomfortable, but “we will not serve your gods or worship the golden image that you have set up.”

Insisting that our only choice is a lesser of two evils is a false idol of an idea we don’t need to bow down to.There is always a better way. With Elisha I pray, “O Lord, please open our eyes that we may see.”


I wonder if God is actually trying to get our attention and pull us away from our dependency on our two-party system. Perhaps He wants us to consider the “invisible” way and that by choosing differently He will reveal His glory more amazingly than we could imagine. What do you think? Do you agree? Disagree? Are you unsure of what to do, who to vote for? Please feel free to weigh in -- civilly -- in the comments.
Posted by Stephen R Clark at 2:02:00 PM