This is a guest post by a dear old friend (more about him below).
Actually, it’s an email that I asked if I could share.
My friend graciously agreed. I think you’ll
be moved by what he has to say.

You may recall me saying in a previous email that I was going to start writing ahead of time so things could be edited into a more coherent mess. Be warned, this ain’t one of those times.

Last weekend the Chaplain sent out a good message that had several points in it. One was his comment at the bottom, “May we learn to ‘number our days’ so we will be ready to meet the Lord with confidence.”

This has been true in my life more times than most would believe. I cleaned the table I am using for a desk two weeks ago and found a ton of things I had thought of writing about, several things I had planned to ship out, including cards for Jonathon and Bob, both sitting there for six months or so, and numerous other stashed things that were waiting to go to someone, but I hadn’t gotten around to sending yet.

I know in the past I have written about making time for the important things in life; your friends and family. I set a poor example at times. I promised myself that on my day off on July 4th I would get all the overdue correspondence off this desk. I also promised myself that if I am to be damned, I would let it be for the things I have done as opposed to the things which I should have done but didn’t.

I hate getting old. I told my brother some time back I was going to die young and leave a good looking corpse to which he replied, “Kinda waited too long for that didn’t you?” He may be right. It seems the older I get the more Brothers I lose. I don’t have many friends, fewer Brothers, but I do have a number of acquaintances. I may explain the difference later. Brothers are hard to come by.

Olendus was a good friend, perhaps not quite a Brother but close. He DJ'd a morning radio show every other Sunday morning and I tuned in religiously, which was only right as it was old gospel music. He had been heavy on my mind for a month or so but I avoided calling him until he missed his radio show a couple weeks in a row. By this time we hadn’t spoken in several months. When I called I couldn’t reach him, so I did what I do. I made a few calls to my friends and Brothers to track him down.

When I found him he was already buried. It seems that things in his life had taken a turn for the worse and he eventually ended his problems permanently. I failed him. What if I had called sooner. Maybe nothing would have changed. Maybe he would be back on the radio. Maybe all he needed was someone to talk with. I guess it will be some time before I get to ask him. He was neither the first or last of people I knew who have been on my mind and passed before I acted.

Bill B. was another, I failed him as well. We spoke after his last check-up, he was doing great. We planned to get together the next time I was up his way. Just three hours. He had just retired and seemed the picture of health, until that heart attack. I met with five other friends of his about a week later. I got back to town and felt honored to be one of those who carried his casket. I failed him as well.

Mr. B was another. I slid through the town he lived in and kept on sliding. I had stopped several months before and he had a hard time remembering me. It wasn't that I didn't care but I was several hours behind and figured I would be back through in a few more months. The older I get the more people I know seem to die.

Wednesday late a call was made to Bob’s house, his sister had left a message on our phone to call ASAP. Bob lived alone, was retired, a veteran of Viet Nam, served with the honor expected of a Southerner, though he is a Yankee. He never married, took care of his mother until she passed some years back. He was an uncle to my boys, a brother to my wife, and in many ways a friend and Brother to me.

When I call a Yankee a Brother, you can bet he stands way above the crowd. Bob was the kind of guy I would go hunting with. Ask those who know me well, I trust few people with my life. He was one of those precious few. Yes, my life has been a bit hectic the last couple of years, but his card is still sitting on my desk. Gathering dust.

It is believed he died Monday but wasn’t found until Wednesday because he missed a routine phone call. No foul play, just age and a hard life took its toll. His funeral is tomorrow, 500 miles away. Due to things beyond my control, I will not be able to make it.

I don’t know the state of Bob’s soul. Yes, we had spoken of such things in the past. He had his views, I had mine. We spoke openly of this but not often. He didn’t throw his views in my face, I didn’t fault him for his. We did not argue, just talked. We all see “Christians” who aren’t really Christ-like and often they stifle any draw to Christ and God for others. That was one of his irritants, irritates me as well, though I am sure I irritate others. Still his card sits on my desk waiting for Monday to be written. Not much point in that now. It gathers dust as I gather failures.

You are not guaranteed tomorrow or the next ten minutes. Neither are those you care about. I recommend that, today, while you and they yet breathe, take a few minutes to get the dust off that card you’ve been holding for later and get it in the mail. I am sure this happens to everyone, but this is not the kind of hell you need running around in your head. Worse is it is preventable.

A little background: Randy Jones and I met more than 30 years ago when I was living in Findlay, Ohio where we attended the same church. He literally came roaring into my life on a Harley. At least I think it was a Harley. Anyway, we became unlikely friends. For different reasons, we both moved away from Findlay and failed to keep in touch. Life happens, as they say. Then on March 21, 2013, I received a message through my business website asking “Are you the same Stephen R. Clark that lived in Findlay, Ohio back in the early 1980's?” It was from Randy! 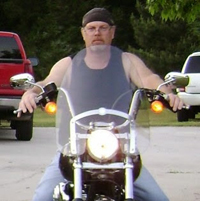 I was thrilled to hear from my old friend and we’ve remained in touch since then, mostly due to his regularly sharing encouraging emails with his friends, many who are guys he calls Brother. I’m glad, honored, and humbled I’m one. Randy is one of those rare good guys where good means good in the very best sense of the word. He’s a wise man, a loyal friend, a guy who loves bikes and guns (he showed me how to shoot a couple of black powder guns once), and he’s a pretty good writer, although he’ll deny that last bit. I thought you’d appreciate his most recent and very poignant insights. Feel free to share your thoughts on his in the comments. In the meantime, as Randy likes to say, “Until the last dog dies.” It’s a guy thing.
Posted by Stephen R Clark at 8:43:00 AM