Politics, it is said, can bring out the worst in us. And note the “us.”

We pick sides, and this year the sides have been legion at times. Once picked, we defend “our man” or “our woman” or “our cause” with vehemence.

At moments it seems like one giant virtual street fight. Verbal knives, chains, and guns are drawn. Everyone starts swinging, going for blood, or worse, in for the digital kill.

It’s at these times that I’m thankful this happens mostly in the not-so-OK corral of social media. Feelings are hurt but lives are spared. Albeit barely at times.

It’s enough to put a lot of people off politics all together. The contentiousness is not attractive and definitely not viewed as productive.

In between the big-leap election years, bloody skirmishes can always be found in other arenas.

Beyond the brutal ugliness of politics

A couple of weeks ago, Tim Challies, a generally good guy, posted a cute little quip on his Facebook page, stating, “I never get tired of hearing about Alistair Begg’s visit to a megachurch. ‘I feel rotten, that’s how I feel. What have you got for me?’”


I never get tired of hearing about Alistair Begg's visit to a megachurch. "I feel rotten, that's how I feel. What have you got for me?"
Posted by Tim Challies on Wednesday, February 24, 2016


The video he pointed to is this one:


In the video, Begg goes on a minutes-long rant about his on-a-lark visit to a larger, apparently well-known church. The service opened with a flourish and from there on was apparently quite rambunctious.

This, combined with the staging and perceived vapidness of the worship leader’s comments, set Begg’s teeth and more on edge. Added to this, it seems, by his own admission, Begg was already in a bad mood. (Frankly, I believe he was prepared to react as he did being biased against this type of worship.)

Like Challies, Alistair Begg is also a generally good guy (although when I listen to him speak in my mind I’m seeing Craig Ferguson). While I’ve not met Challies, I have met Begg.

While I was living in Cleveland, I was privileged to be one of a group from Metro Alliance Church who, at the invitation of our pastor, Juri Ammari, attended the 2010 Basics Conference: A Conference for Pastors on Preaching held at Begg’s church. It was a great experience.

The event included participation in a regularly scheduled church service. It was a good service but of a style that I was not drawn to. I never visited Begg’s church after that.

Nor did I make a YouTube video ranting about those style elements of the service that I was not drawn to. Ultimately, I have no issues with Begg or his church. He is a good guy and his is a good church; they are solid on substance.

To me, when it comes to my faith, substance -- the whole contextual substance -- of a service and the church that holds it, is far more important than style.

But, given that God created me (and you, and Begg, and Challies) with distinct personalities that have style preferences, I do make decisions about where I regularly worship with that preference in mind.

We all do it. And that’s okay.

What’s not okay is bashing each other over style variations. Or, just as bad, over non-essential doctrinal differences.

By non-essential I mean those finer points of doctrine that make our chosen belief systems unique and interesting, especially to us and those who agree with us, but that in no way at all determine our suitability for heaven.

They don’t add to or subtract from our salvation, sanctification, redemption, and all those central truths that make up solidly biblical, orthodox belief.

It’s when we -- and by we I mean Christians, especially those who fall into the accepted definition of true evangelical -- put style on the same level as substance that we get ourselves into trouble.

And the fights over these ephemera get absurdly bloody.

Begg’s rant is just a mild warm-up to what he really thinks of those who don’t worship as he prefers.

Put up your doctrinal dukes!

I’m not a theologian but I do enjoy reading and talking about theology. Still, I’m not an expert. But I know some stuff.

There are, as far as I can determine, two overarching theologies or doctrinal positions currently prevalent. You can label them as you wish.

One is Calvinism (aka Reformed) and the other is Arminian (which has nothing to do with Armenia).

From each of these massive limbs of well-rooted belief systems, many smaller branches have sprouted, each a variation on the theme of their limb. I’m not going to address these variegated offshoots. I’m hanging out only on the main limbs for now.

I lean Arminian. Always have, although I didn’t always know what Arminian meant. I’m still learning.

While I lean Arminian, I hang out with a lot of Calvinists of varying hues and stripes. They’re good people and I have no real issues with them. Usually.

There’s much about the Reformed way of looking at things I agree with and can embrace. But there are some finer points I’m just not convinced of, but these need have no impact on being able to enjoy fellowship with those who hold them.

Why? Because on the essentials -- those very critically important core truths that make up the heart of biblical orthodox belief -- we firmly agree.

Sadly, there are those in both camps who aren’t so amenable to agree to disagree, but insist that the other embrace everything they believe, or otherwise they are “wrong” and thus, outside of their self-drawn circle of orthodoxy.

More than once I’ve been reading a book written by a Calvinist that was good stuff. Until they suddenly started addressing, in a very much in-your-face manner, the narrow specifics of their Calvinist view while taking not-so-subtle swipes at Arminian belief.

At these points, the books are spoiled.

Can’t we all just get along?

In a previous (and relevant to today’s topic) blog post I wrote:


Francis A. Schaeffer stated that, “Though genuine Christians may, and in fact do, disagree over certain points of Christian thinking, there are absolute limits beyond which a Christian cannot go and still stand in the historic stream of Christianity.”

He agrees that there is room for variation of expression within these absolute limits, explaining “we should picture a circle within which there is freedom to move.”

Calvinists and Arminians are both well within that circle.


“The evangelical tent is big enough to welcome under its shade Calvinists and Arminians, anabaptists and charismatics, Anglicans and Methodists and Baptists, and I love it when Catholics and the Orthodox join.”

Whether circle, village green, or tent, we have a mandate about getting along within it.

Just before Jesus was crucified, he declared to his followers,

In the foreword to his excellent little book, The Mark of a Christian, which is essentially an exposition of these verses, Francis Schaeffer states,


“Christians have not always presented a pretty picture to the world. Too often they have failed to show the beauty of love, the beauty of Christ, the holiness of God. And the world has turned away.”

This is not a good thing.

The whole world is watching

Years ago, a church where I was a member was in crisis over what was essentially a stupid non-doctrine related issue. I’ll spare you the details. Things were getting heated. Emotions were out of control. It was getting personal and ugly.

Broken-hearted at what was happening, I felt compelled to write an open letter to the Board and the congregation. I quoted a lot from Schaeffer’s little book. The main thrust of the letter was, we’re not looking so good to those in the community we’re supposed to be ministering to.

My letter was ignored. The fight went on. The church split. And I’m not sure that the wounds are totally healed to this day.

The same kinds of mean-spirited skirmishes break out within the greater church on a regular basis. Voices are raised. Books are written. Sermons are preached. Arbitrary lines are drawn. And spiritual blood is needlessly spilt over thinly sliced doctrinal ephemera.

The laying on of hands is not meant to be fisticuffs, real or metaphorical!

Meanwhile, out there in the world to which we are called to be light and life, all that’s seen is ugliness and death.

And the world turns away. This should not be. There’s room at the cross for all which is where we should be leading the lost.

As we watch in horror and decry the insanity, meanness, and downright brutal nastiness of our American political scene, let us not become self-righteous. Just as bad and worse plays out within this blessed milieu we know as the Body of Christ.

It’s neither healthy nor attractive when it does.

And yet we lament the downward spiral of church attendance and the increasing numbers of “nones.”

Perhaps the first place we need to make changes is within our own hearts and minds, avoiding even the appearance of this evil.

Okay, I’ll agree, Begg’s rant isn’t that bad, and I can agree with some of his points. Still, was it necessary to share from the pulpit? Does this kind of thing further the Gospel of Christ? Does it advance the Kingdom of God? Does it draw people to salvation? Could there be more appropriate and less public forums for addressing these kinds of issues? Shouldn’t all churches be focused on communicating a message of salvation and fostering an environment of biblical discipleship rather than seminars on how to choose the sides among the faithful? Please share your thoughts, nicely, in the comments! 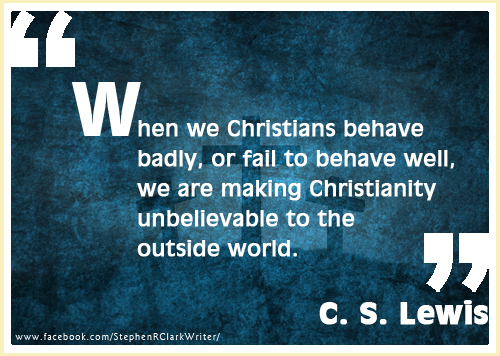