It’s election season and the air is filled with the headiness of empty promises and even emptier buzzwords and jargon.

In other words, the straightest line to a not-exactly-the-truth is through the spin and fog of jargon and buzzwords.

The American Heritage® Dictionary of the English Language, Fourth Edition (AHD) defines buzzword as “A word or phrase connected with a specialized field or group that usually sounds important or technical and is used primarily to impress laypersons. A stylish or trendy word or phrase.”

When I was immersed in the corporate world -- and for some reason a line from an old hymn, “years I spent in vanity and pride,” suddenly came to mind -- my days were often awash in jargon and buzzwords.

Every industry, every group, every social milieu has their unique “insider” technical terms.

In fairness, most of these are legitimate terms that can be useful for communication within these groups.

I’m not that kind of switch

No, that doesn’t stand for private investigator, although that was a function of our job. It means “proposal integrator.” Basically, we collected all the various bits and pieces (inputs) from the SMEs (subject matter experts) that went into a proposal, edited them, and “integrated” them into a cohesive document.

My first day on the job I was shown to a bare cubicle wrapped awkwardly around a pillar and given a stack of paper to copy-edit. The paper was for a huge proposal to Telmex for a complex telecommunications system.

One of the first unique terms I came across was something about a 5ESS Switch. My idea of a switch was a light switch on the wall. A 5ESS is not that.

From there, it only got worse. I literally went home that night, and in tears, cried out to God, “How in the world can I edit something when I have no iota of a clue what it means!”

Added to the challenge of legitimate technical terms was the superabundance of acronyms. Every piece of equipment, every process, every group, every role and more was expressed as an acronym. Worse, many acronyms could have multiple meanings.

Don’t even get me started on the multiple meanings of ATM!

Since many of the SMEs who were providing text for the proposals only referenced the acronym, my challenge as the PI was to sniff out the specific meaning based on the context. Given that much of the context consisted of technical jargon and more acronyms...well, you get the idea.

This is not an uncommon subject matter enigma. (See what I did there?)

The arcanity of the long-distance theologian

I love to read books of or about theology. Usually. But even theology has its cryptic challenges.

Not too long ago I Tweeted this: “If the book you’re reading is full of weird terms & Latin phrases, it must be theology.”

If the book you're reading is full of weird terms & Latin phrases, it must be theology.
— Stephen R. Clark (@stephenrclark) January 13, 2016

How many do you know? Even spell-check gets all squiggly and red when it encounters many of these!

I thank God for the Internet and online resources such as the Christian Apologetics & Research Ministry / Dictionary of Theology. Whenever I’m reading theology, nearly every page yields at least one word I need to look up. Even if I “know” what the term means, I often still look it up just to be sure.

There’s no problem as long as these specialized terms are being used to communicate within the group where they have meaning.

The problem comes when they creep outside where they are confused, misused, and seldom well-defined.

Meaning and intent can get slippery.

The dizzy merry-go-round of the zone of spin

Buzzwords are often born when legitimate technical terms are taken outside of where they belong.

I have a PhD in gobbledygook

The least harmless offense is when someone is trying to impress someone else and does it by over-using the unique language of their supposed area of expertise.

Those inside the camp recognize it as showing off,  those outside the camp are too often impressed yet unenlightened.

In an article lamenting, in part, obfuscatory writing in the humanities, Bruce Cole offers this prime example of academic-ese:


“Writing this book, I came to see the new scholar subject as a performative of passionate singularity, hybrid materiality and networked relationality. This is one sense in which the humanities scholar that is becoming is possibly posthuman, and a posthumanist scholar. The locus of thinking, for the prosthetically extendable scholar joined along the currents of networked relationality, is an ensemble affair.”

No real people were harmed (as far as I know) by this unfortunate turn of wording. But it is pointless effort to write like this.

Let’s iron out a few things

A recent example of an insider term that’s slipped out is the use of “presser” for “press conference.” Presser is cropping up more and more, especially on cable TV news.

While presser is a perfectly fine term for reporters to use among themselves, it is not a word that should be used when they are talking to you and me. For us, it’s a press conference.

Using presser is essentially lazy and a little arrogant.

Frankly, the term sounds like a combination ironing board and dresser. Think about it.

It can also be confused with a meet and greet where people press the flesh!

My advice to all journalists everywhere is to keep presser to yourselves, and in your viewer- or reader-directed reporting, use press conference.

A little less-than-harmless is when those inside the camp truly believe and think and therefore always write in their insider language, thus rendering everything in buzzword-ese.

This happens a lot in business management. Scott Adams, the man behind Dilbert, has done a lot to expose this nonsense. Sadly, being exposed hasn’t put an end to it.

What prompted this post is my coming across an old file from my AT&T days. It perfectly characterizes the foolishness of business buzzwords. I share it below for your amusement. I’m sure you could add several “new and improved” buzzwords to the list.

The seemingly loopy lingo of faith

Beyond theology, the Christian church is also plagued with its own obscure everyday language. I’m not referring to “tongues” either!

I tackled this topic in a 2011 post, “It’s all Glossolalia to me!: Speaking in tongues in plain English.” In the post I explained:


“I grew up speaking ‘Christianese.’ It’s the language we used when talking about the Bible, church, Jesus, God, and all things religious. In fact, anyone who has been a Christian for a few years tends to speak Christianese. It comes natural.”

“Much of Christianese is an adaptation of snippets from Scripture [often KJV] strung together as needed. If you don’t know the Bible or have never been to church, you most likely won’t understand Christianese.”


There’s even an online dictionary for this language: Dictionary of Christianese!

The insider language of our faith, especially taken out of context, provides a lot of fodder for comedians and others.

It also doesn’t do a lot for clear communication. And when sharing our faith, being clear is essential. If we employ insider faith-terms, we should be able to clearly define them to those with whom we are sharing.

In fact, even when speaking with other Christians, it’s important to clarify your terms because meanings shift from one part of the body to another. If you catch my meaning.

An obfuscated faith is a useless faith.

And now, my point!

Language is fun and malleable. When we talk with each other, we should strive to be clear and coherent.

When listening to others -- especially right now, to politicians -- we should be willing to dig into their words to get at their real meanings. We should press them to explain what they mean, why they’re saying what they are saying, and how they are going to accomplish what they’re promising.

We should also be astute to recognize spin. To see past the surface of a message. To be willing to look behind the curtain of endless words. What’s behind them? More shallow messaging or a real person with solid ideas?

And when we encounter someone who, even when pressed for more, only speaks in buzzwords, flippant phrases, high-sounding tautologies, and sweet-sounding scripted stump-speech snippets, we should be immediately skeptical.

In other words, this election season, caveat suffragator!

I mean, let the voter beware.

What kinds of jargon have you encountered in your line of work? Have you ever been stumped by jargon or buzzwords? Have you ever misused a buzzword thinking it meant one thing when it meant another? Do you think jargon and buzzwords are a problem in communication, or do they actually help keep things clear? By all means expound upon your mental formulations in the area allowed for obiter dictum. I mean, please share your thoughts in the comments! 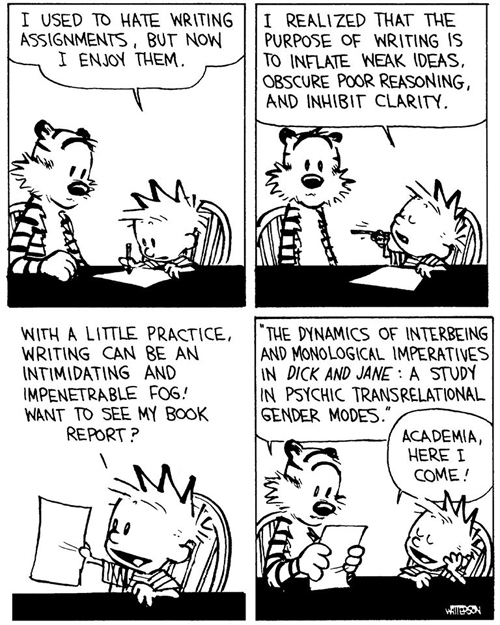