Based on popular memes and social media postings, it would be easy to assume that many Christians seem to be “worshiping” a new false trinity: Guns, Fear, and Lies.

Sadly, instead of recognizing this error and repenting, most will probably take great offense at this post and strenuously object, even becoming belligerent, insulting, and unkind.

In other words, they will defend their (what is really a false) Christianity by being quite un-Christian.

And then wonder why so many people are leaving the church and eschewing faith in God.

This same false trinity of fear, lies, and weapons afflicted Saul and his army when they were being bullied by Goliath.

Most are familiar with the event. If not, you can read the whole story in 1 Samuel 17.

It’s a bad day in the neighborhood

Goliath was a giant of a man. He challenged Saul to send out one of his best warriors to settle things in a winner-take-all round of face-to-face combat.

Saul and his army cowered in fear because of the impression this one large loud-mouthed man made. 1 Samuel 17:11 is blunt, stating, “When Saul and all Israel heard these words from the Philistine, they lost their courage and were terrified” (HCSB).

It was fear, by the way, that sent the heavily-armed Iraqi army scattering in their first skirmish with ISIS.

The taunting from Goliath went on for 40 days. Forty days!

It’s easy to imagine how the men in Saul’s army magnified the reality of Goliath’s taunts. And it’s a sure bet word spread through the region and the truth was stretched as the story was repeated over and over. It’s what we humans do. Remember the innocent game, “Telephone”?

Borrowing from sports, imagine what it was like for little Stephen Curry to go up against the “giant” LeBron James. James’ reputation is bigger than life and he is a man of great physical stature. But Curry was not dissuaded by any of this.

When David told Saul he would face Goliath, Saul immediately wanted to load David down with his armor and weapons. These were what Saul trusted in, even though they really didn’t serve him very well.

What Saul was offering is the modern day equivalent of automatic weapons and body armor.

Ironically, Saul was also “armed” with thousands of warriors who were of no use!

Trusting in all the right stuff

Saul was defeated without even engaging in the battle because he put his faith in the false trinity of Fear, Lies, and Guns (Weapons).

So what made the difference with David?

David shows up bringing a care package of goodies from home for his brothers who are part of Saul’s army. While there, David hears Goliath’s taunts and begins to ask questions. When he grasps what’s happening, he courageously offers to face the giant.

His courage wasn’t bluster, but rather was based in the reality of his own experiences as a shepherd protecting his flock against predators.

In other words, “he’d been there and done that.”

David didn’t rely on rumors or hearsay or even accept information at face value. He asked questions. He probed for the truth. Even when rebuffed and pooh-poohed by his brothers, he kept asking questions.

His courage was grounded in truth. He recalled his own experiences and how, with God’s help, he had overcome.

This was a habit of David and is echoed in his Psalms where he says, “I will remember the deeds of the LORD; yes, I will remember your wonders of old” (Psalm 77:11, ESV).

David avoids falling into fear by standing on the truth.

David rejected Saul’s armor and weapons which would be the equivalent of assault rifles and body armor today. Instead he armed himself with a slingshot and a few stones. Essentially it was like going into battle with a BB gun.

As a result Goliath fell.

Worshiping the false idol of fear

Every time there’s a terrorist attack anywhere in the world or a mass shooting in the U.S., many -- too many -- Christians go into panic mode.

Social media lights up with calls for adding to personal arsenals, building safe rooms, stocking up on survival gear and food, closing borders, and bunkering down. All of which takes time, energy, and money -- and is totally fear-driven.

It’s also completely self-serving. Selfish. All about “me and mine.”

I can’t find anything in the Bible that would support this type of behavior or thinking, especially in anything Jesus directed us to do.

Instead, what we find is Jesus assuring his disciples, and us, “In the world you will have tribulation. But take heart [courage]; I have overcome the world” (John 16:33, ESV).

As Christ’s disciples, we are called to exhibit courage.

Worshiping the false idol of lies

As Christians, we must be diligent to uncover and share only what is true.

When the attack in San Bernardino began to unfold, early reports alleged that the shooters wore “body armor.” They did not and the authorities have stated this clearly. Yet these erroneous early reports persist as rumors.

There have also been absurd characterizations by the media about the “arsenal” that had been “amassed,” the “tactical gear” worn, and the “bomb factory” in the garage.

The simple truth is that the “tactical” gear was nothing more than ammo-vests and clothing anyone can buy at sporting goods or Army surplus stores. The “arsenal” was, as far as I know, five guns -- fewer than what many ardent NRA members own. And the same goes for the amount of ammo they had “stockpiled.”

As for the “bomb factory” containing “hundreds” of tools, it was a garage where the man refurbished cars, not unlike thousands of “normal” garages in our neighborhoods. With only a few tweaks nearly every garage in America could be labeled a “bomb factory.”

These are all alarmist exaggerations intended to increase media readership and viewership. Nothing more.

As rational Christians with the “mind of Christ” and employing discernment, we must see through and expose lies and distortions of all kinds.

What happens when we turn away from truth and let lies reign in our thinking and lives? Nothing good!

And Jesus warns “[Satan] was a murderer from the beginning, and has nothing to do with the truth, because there is no truth in him. When he lies, he speaks out of his own character, for he is a liar and the father of lies.” (John 8:44, ESV).

Paul instructs, “Therefore, having put away falsehood, let each one of you speak the truth with his neighbor, for we are members one of another” (Ephesians 4:25, ESV).

As Christ’s disciples, we are called to live, think, speak, and act in truth.

Worshiping the false idol of guns

Every time I see a social media post or meme from a Christian touting Second Amendment rights, I cringe.

Especially when it happens on the heels of a national tragedy like what’s happened in San Bernardino, or a world tragedy such as the Paris attacks.

Some of these posts and memes even border on bloodlust.

Irrationally, calls for better gun control are immediately viewed as threats to take away all guns. And, I’m sorry, but whenever I hear Wayne LaPierre speak, it makes my skin crawl.

In this country, for many Christians it seems guns have become their idol. Their church is the NRA. Their gospel is the bullet.

This is drastically wrong and horribly ugly.

It shifts trust away from God onto a thing - a created, manmade, death-dealing thing.

All through the Bible, over and over, there are examples of people putting their trust in everything but God when up against an enemy or problem. In every instance the not-God thing failed them.

Yes, people bore arms in their defense, but those who were ultimately most successful always put God first and foremost.  Many never even had to lift a finger to defend themselves.

They did not trust in manmade weapons for deliverance. They put their trust firmly in God and God alone.

As David put it, “Some trust in chariots and some in horses, but we trust in the name of the Lord our God” (Psalm 20:7, ESV).

As Christ’s disciples, we are called to trust in God and God alone.

What the world needs now is not more armed Christians

If more Christians were as energetic about reading, studying, sharing, and living out God’s Word (aka the Bible) as they are about defending their right to bear arms or uncovering a terrorist under every shrub, well, there just might be a little more peace on earth and joy in the world. And maybe even that revival so many say we need!

The louder Christians are about demanding their rights to own their own “arsenals” the less non-believers are willing to listen to the Gospel.

Frankly, I believe many Christians would happily hand over their Bibles before giving up a gun or two.

This is not even close to the witness we are called on to live into our communities and world.

Let me be clear. I have no objection to people owning guns. I grew up with guns in the house. One of my favorite activities when I was in Scouting was to go to the rifle range where I regularly won awards. But I have no need for assault rifles or an arsenal! Neither do you.

What concerns me is the message and image Christians are projecting to those around us that we (Christians) are fearful, easily believe lies over truth, and trust more in guns than in God.

Living FEARLESSLY in TRUTH under GOD

Instead of thoughtlessly passing on rumors and sharing questionable memes, why don’t we share our testimony and God’s Word with our neighbors?

Instead of clamoring about gun rights, why don’t we act on our responsibility to point people to the Gospel?

Instead of spending money on more guns, survival foods, or safe rooms why don’t we contribute money to help those directly impacted by shootings?

Instead of worrying about being overrun by terrorists, why don’t we get our churches involved in more community outreach and counter ideology with real truth?

After all, the real Enemy we’re up against -- and with whom we should not even appear to be allied -- feeds on fear, fathers nothing but lies, and is impervious to guns:


“For we do not wrestle against flesh and blood, but against the rulers, against the authorities, against the cosmic powers over this present darkness, against the spiritual forces of evil in the heavenly places” (Ephesians 6:12, ESV).

With courage, truth, and God we can defeat every Goliath that the Enemy raises up. We don’t need more guns.

Okay, so what do you think? Agree? Disagree? Maybe a little? Feel free to comment and counter my points. Just be kind, accurate, biblical, and civil. Let the (friendly) drubbing begin!


The graphic was adapted from “Adoration of the Lamb,” by Jan van Eyck (1432), oil on wood, Ghent altarpiece, Cathedral of St. Bavo, Ghent. 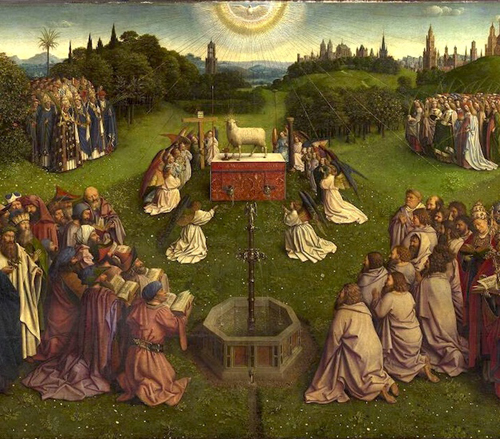