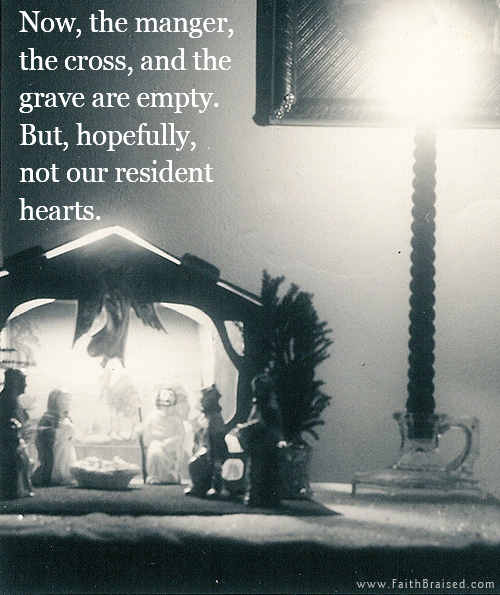 Every year it came out of the basement to make a prominent appearance, usually on top of our TV. This was back when deep-tubed screens were housed in large wooden boxes, fancy faux cabinetry with three channels.

Even though most appropriately labeled a crèche, we simply called it “The Nativity.”

It was made of stiff die-cut cardboard decorated with smatterings of glued-on straw. Packed away flat, the walls folded up where the cardboard was scored and connected with slots and tabs. The roof, a separate piece, once snapped into place, held it all together.

This stable, a holy dollhouse, was an open-fronted room with windows all around. Breezy, for sure.

The figures were molded plastic, poorly painted. Mary, Joseph, a one-piece baby Jesus and manger, three kings, a couple of shepherds, sheep, a cow, a camel, a donkey. Fake greenery planted in foil-covered wooden thimbles graced either side for “realism.”

Above it all a star and an angel. The star was a candle. There was also a small bulb positioned inside at the back, just out of sight, that, when on in the evening, offered a perpetual sunset glow.

This was our traditional Christmas imagery. The key elements of the story compacted into one still scene. A sacred 3D snapshot of compressed time.

Then I heard in some sermon somewhere that it wasn’t a stable, but a cave, where the holy family sheltered. Hewn from the rocky hills, damp and stuffy, but at least offering a little more protection from the elements.

Next, the elements themselves were called into question. There was no bleak midwinter snow on snow or moaning frosty wind as Christina Rossetti had misled us. Rather, it was most likely balmy, possibly fall. Maybe at night it was a littler cooler. But no snow.

Then it was exposed that the three were not kings, nor necessarily three, and definitely not there at the birth. The wise men came later, as much as two years. After their visit, they left, amazed and in secret, triggering a small massacre that isn’t talked about much.

There’s also no report of any angels hanging about at the scene of the birth. Odds are, some have said, there were no animals lowing or adoring either. Not even camels.

And it’s not implausible that Mary and Joseph did not employ a donkey for transportation or travel alone. Instead, they may have been part of a foot-borne caravan, a moveable feast of fellow travelers.

Now, the stable that morphed into a cave, is said to be, perhaps, a guest room in a relative’s house. Or, more likely say some, a ground level room that served as a sort of secure sheep-hold for an animal or two at night.

But that would mean there were animals after all, right?

The Bible’s accounts skimp on certain details artfully imagined over the years. There was no curmudgeonly innkeeper or even an inn, in the traditional understanding of holiday inns.

No talking animals. No angels at the door. No Amahl. No night visitors named Melchior, Balthazar, or Gaspar. Definitely no drummer boy.

Regardless, there is one thing that holds true. The manger. The feeding trough. And Christ as a baby in it.

Now, the manger, the cross, and the grave are empty. But, hopefully, not our resident hearts.

This is immutable: Immanuel, God with us. Oh, holy night, indeed! It is more than enough to draw us to our knees in adoration.

This is the third post related to this theme of “correcting Christmas.” Click here to read the first, a poem, and click here to read the second, an essay. Is there a special decoration or activity that you had in your house when you were young that marked the start of the Christmas season? What are your favorite memories? Was Christmas a happy time or a hard time? Why? What about now? Please share your reactions to this meditation and your own Christmas memories in the comments! 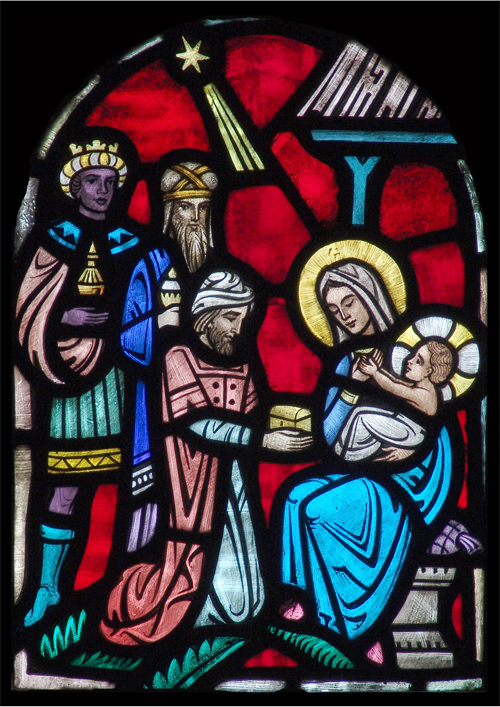