Let’s have some wholly holy fun by putting the “hallow” back in Halloween!

In Edgar Allan Poe’s fictional short story, “The Masque of the Red Death,” a wealthy prince, Prospero, gathers his friends into a sealed abbey, determined to hide from the “red plague” ravaging the country outside.

Believing they are safe from a disease that kills quickly and brutally, Prospero and his guests party on. After some months, someone new shows up and, well, things go opposite of what was intended.

In other words, they circled the wagons against the “evil” they perceived in the world but it still got in. And it killed them.

Kind of like a lot of Christians do when it comes to Halloween.

These fretted believers behave as if this is what Paul admonished in Ephesians 6:


“Finally, be hidden in the Lord and in his mighty power. Circle your wagons so that you can avoid the devil’s schemes. For our struggle is against our ungodly neighbors, as well as scary things going bump in the night and against the spiritual forces of evil who come trick or treating at our doors. Therefore bunker down, so when the day of evil comes, you’ll be clueless as to what’s happening, and after you have cowered in fear, you can point to how the world around you is going to hell in a hand-basket.”

As a kid I loved Halloween. So did my friends. We dressed up as friendly spooks, good witches, silly pirates, and raggedy little beggars.

Our goal was candy.

The decorations on the doors we knocked on were of cute hunch-backed kittens, smiling little witches, toothy Jack-o-lanterns, and dancing cardboard skeletons.

Besides trick-or-treating, there were the Halloween parties --many hosted by our churches -- with games, bobbing for apples, costume judging, apple cider, donuts, and more candy.

It was fun. Innocent fun. I’ve captured the mood in a poem called “Rounds” (click here to read). In a more recent poem “A Bone to Pick,” I lament the loss of Halloween’s innocence.

But, even then, there were those who were beginning to insist, because some were claiming Halloween had some dark roots, the holiday was an anathema event for real believers.

There are always the party poopers. 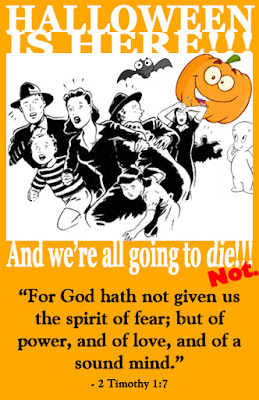 Yes, I know, there are the claims of our modern Halloween having origins in the Celtic fire festival called Samhain, a celebration related to the end of the harvest season. That it was picked up by the Druids, Wiccans, and other pagan groups and made one of their prime “religious” days. And that now there are those who make it a day of evil.

We shouldn’t care! Or at the least we should not be fearful.

The claim is that by participating in Halloween in any way, Christians are somehow worshiping the devil or yielding themselves to that evil.

And at least one of my Facebook friends has declared that Protestants shouldn't be celebrating Halloween because “a big part of the Reformation was to purge the church of the false teaching of purgatory and works based indulgence system.”

He who was seated on the throne said, “I am making everything new!”

Halloween is also tied to All Souls’ Day and All Saints’ Day. In the day’s title is the clue to a better response from Christians. Halloween is merely a shortened version of All Hallow’s Evening. The definition of “hallow” is “to make or set apart as holy; to respect or honor greatly; revere” (American Heritage Dictionary).

Just as people can be made new and holy in Christ, so certainly can man-made holidays. We don’t need to hide from a calendar event.

Instead of ceding ground to the enemy and letting evil rule, we need to recognize that what Paul was really admonishing in Ephesians is this:

In other words, put on your costumes and let your light shine! It’s time to stop running, come out from hiding, take a stand, and put the “holy” into Halloween!

Fostering whimsy and joy over horror and fright

There are some churches who have grasped this truth and offer events such as “Holy Ghost Parties” or “Boo Bashes” or the semi-lame “Harvest Happenings.”

While these are moving in the right direction, they do so hesitantly by labeling these events as “alternatives” to Halloween.

It’s time to get over the skittishness and start having truly “Blessed Halloween” events.

The focus is to have fun not promote fright. Keep things light and point to the “hallowed” aspect by dressing and decorating appropriately.

A simple rule of thumb here is to aim for whimsy and not horror. If anything depicts cruelty, it’s over the line and not appropriate. This eliminates blood, gore, and worse, including “Christian” haunted houses that depict horrible accidents and the like.

I miss the days of truly “Happy” Halloweens. I abhor what’s become mostly a giant horror-fest.

It’s time to push back the darkness and light a candle -- and put it inside a happy Jack-o-lantern.

Have a happy, holy, and blessed Halloween! 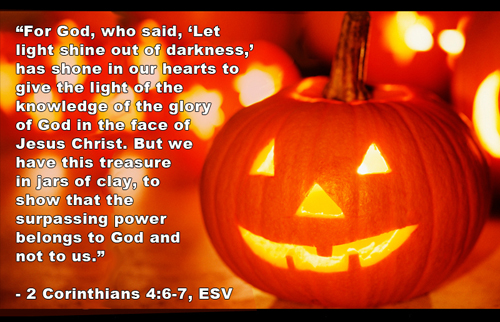 Agree? Disagree? Why or why not? Do you enjoy or hate Halloween? What's your favorite Halloween memory from childhood? What's your biggest complaint about Halloween now? Don't be afraid! Sound off in the comments!