Are you damaging the cause of Christ & being the mouthpiece of Satan with lazy, slanderous social media posts? Probably.

1 Peter 2:1 is a very instructive verse offering some pretty clear admonishments to believers: “So put away all malice and all deceit and hypocrisy and envy and all slander” (ESV).

We are instructed in blunt terms to put these away, meaning to eliminate them from our behavior.

Sadly, in social media especially, the fifth and last one -- slander -- is all too common.

This needs to be corrected.

Avoiding the slippery slope of slander

What is slander? It’s spoken or verbalized libel. Libel means to malign.

To be a little more precise, the American Heritage Dictionary offers these definitions for both terms:
Slander by any other name is still slander.

Just recently I saw this meme posted on Facebook (I overlaid the warning text to discourage further sharing): 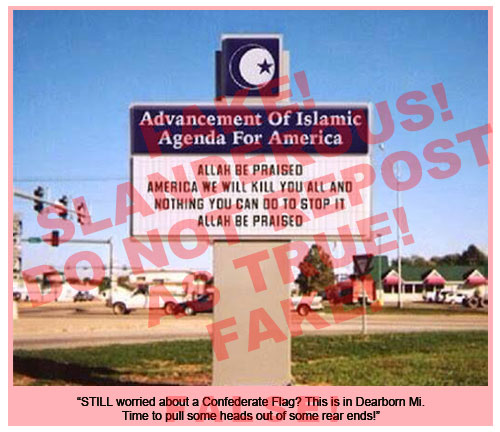 The posting declared, “STILL worried about a Confederate Flag? This is in Dearborn Mi. Time to pull some heads out of some rear ends!”

The thing is it’s a slanderous, malicious fake. It’s a lie. It’s libel -- slander -- a false publication. A distortion. A misrepresentation.

The sign does not exist in Dearborn, Michigan or anywhere else within the United States. Yet people share the post -- even Christians -- because, well, it seems true, or they want it to be true.

The content of the meme was intentionally created to malign, to be hostile, to be malicious toward all in the United States who are followers of Islam.

Tossing the Golden Rule on the garbage heap

So let me say it again. The posting and sharing of the meme is libelous. It’s simply slander.

The word slander as translated from the original Greek in 1 Peter is defamation, which is defined as “To damage the reputation, character, or good name of by slander or libel.”

This meme just one example of dozens of such slanderous items that are posted by Christians on social media every day. And it needs to stop.

It’s sinful. It’s hurtful. There is no good, biblically supportable defense for posting such damaging piffle.

In fact, this meme checks off at least 4 of the 5 sins cited in 1 Peter 2:1: It’s malicious, deceitful, slanderous -- and it’s hypocritical for a Christian to post such garbage.

Is it any wonder believers get so much hostility thrown back in our faces? It’s time we started doing a little cheek turning and aggressively living out the golden rule.

Three times is a charm

When studying the Bible, it’s a known truth that when something is mentioned 3 or more times, that’s a good indication that it’s a serious issue. In other words, we would do well to pay attention and take corrective action as needed.

In addition to the 1 Peter reference, here are a few more biblical references to the problem of slander:

Lazy is as lazy does so don’t be!

I know some who post items they aren’t sure are true or not. Their claimed motivation is to “spark a dialogue” or “get feedback” from friends about its veracity.

This is both lazy and irresponsible.

If it’s some kind of distortion or outright deceit, then you are accountable for passing along a lie, a slander, a falsehood.

With so many trustworthy resources available at our fingertips, there is zero excuse for not taking the time to research what you want to post.

But if you’re just too lazy and aren’t sure if something is true or not, and don’t want to do the research, then just don’t post it!

If you do post something and then are told by others it’s wrong -- take it down! Leaving it up is a tacit endorsement.

Believers who knowingly or lazily post slanderous or erroneous items damage the cause of Christ and hurt the reputations of all Christians. It makes us all appear stupid and mean.

Working hard for the Devil

In John 8, Jesus is confronted by the Pharisees and challenged on some moral issues. He responds by schooling them on grace and truth. In verse 44, he pulls no punches when he declares to them, “You are of your father the devil, and your will is to do your father's desires. He was a murderer from the beginning, and has nothing to do with the truth, because there is no truth in him. When he lies, he speaks out of his own character, for he is a liar and the father of lies” (ESV).

Satan is the father of lies. He is the tireless accuser (Revelation 12:10).

When we post defamatory, untrue, misleading, erroneous, insulting memes and articles on social media, we are expressing the character of Satan, and in no way being Christ-like.

It’s the same as being Satan’s mouthpiece!

This is something believers need to take very seriously.

There are right and better ways to express our disagreement and displeasure without being dysfunctional or damning.

In the 1930s, Christian businessman Herbert J. Taylor, developed a simple test that can easily be applied against any potential post you want to share.

Taylor and his company were at a crisis point. He was concerned that employees “think right and do right” and that executives “set policies for the company that would reflect the high ethics and morals God would want in any business.”

At his desk he prayed for guidance and then wrote down what came to him which he then labeled “The Four-Way Test.”

This is a test we each should apply to everything we want to share in social media:
I would add one more: For a Christian, if anything we post cannot be supported by Scripture, then it’s off-limits.

If the answer to all four questions is not a resounding “Yes!” or what you want to post is counter to Scripture or biblical truth, simply don’t post or share the information or item.

By the way, this applies to sharing information that seems innocent and even helpful, but isn’t true or accurate. Passing along false, untrue, or inaccurate information is the same as telling a lie. Always verify everything before you post it. Or else, just don’t share it. It’s better to be safe than a liar.

Love means being able to say you’re wrong & you're sorry

If you have posted hateful and slanderous memes and links, it’s time to take them down, and then go one step further.

You need to apologize to those you have attacked. And to those who have viewed your posts.

This step is essential.

In her excellent book, Total Truth, Nancy Pearcey laments, “When the only form of cultural commentary Christians offer is moral condemnation, no wonder we come across to non-believers as angry and scolding.”

As bad or worse than moral condemnation is slander and it’s kin.

Sharing these kinds of lies puts forth a very ugly and distorted image of Christ, the Christ we are supposed to be reflecting and representing to those around us.

Jesus admonishes us saying, “This is my commandment, that you love one another as I have loved you. Greater love has no one than this, that someone lay down his life for his friends” (John 15:12-13, ESV).

Sometimes, laying down our own life is as simple as not posting something hateful.

It’s time for Christians to start being truly Christ-like on social media and stop working for the devil.

Do you agree or disagree? Why? What are your suggestions for expressing disagreement in a godly, loving manner? Share your thoughts in the comments!
Posted by Stephen R Clark at 1:00:00 AM