Stuff has been happening in Morehead, Kentucky and now they have a new billboard to deal with.

As headlines about the new billboard tout, the point is to mock Kim Davis, the county clerk who has refused to issue marriage certificates to same-sex couples. She went to jail for standing on her beliefs.

I’m not going to comment on whether or not I agree or disagree with her actions. Here are some stories that take a look at the issue from different angles you can read if you’re interested and make up your own mind:
What I want to do is, briefly, address the fallacies contained in the billboard.

The billboard message reads: “Dear Kim Davis, the fact that you can’t sell your daughter for three goats and a cow means we’ve already redefined marriage.” It was put up by an organization called Planting Peace (www.plantingpeace.org).

At least one news article about the billboard states the message is “an apparent reference to biblical verses that permit the selling of women.”

There are at least three major issues with this billboard.

First, true marriage has not been redefined

The Bible is clear that a marriage is a marriage only when it is a uniting of one man (male) and one woman (female).

This reality was established from the beginning as stated in Genesis 1:27, NIV: “So God created man in his own image, in the image of God he created him; male and female he created them.” This truth has been affirmed by millions of orthodox biblical Christians for centuries and still is.

While the definition of true marriage has not changed – and can never be changed – the cultural expression of marriage has shifted. This has almost always been true and is especially true now in the United States.

When man (meaning humankind which includes males and females) exercises his God-given freewill as a fallen, sinful creation, things tend to go awry. This, too, started in the beginning, in the Garden.

Even in Old Testament times – as reported in God’s Word but not endorsed by God – to the dismay of God, men took on several wives. Some would additionally maintain concubines – women that were available to them but not considered wives.

The idea of polygamy is found in a variety of cultures even today. The idea of same-sex marriage is relatively new. And now it is a legally defined option for the expression of marriage within the U.S.

That this is a true concept should not be a foreign idea to anyone who’s ever raised a conscious objection to something the law was endorsing. 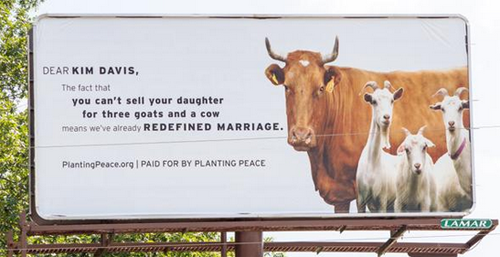 Second, this is not a biblical reference

There is nothing in the Bible, as far as I can determine, defining marriage as selling one’s daughter for three goats and a cow to a husband. (If you think there is, please point out a specific reference in the comments.)

Perhaps this idea sprang from the practice of some cultures that offer a dowry to the bridegroom at the time of marriage. This is a cultural practice, not a biblical mandate.

In fact, the slogan – and it is only a trite slogan – has nothing to do with the Bible. You can read about how it came to be here: “From the Man Who Brought You Three Goats and a Cow”.

That the slogan is assumed to be taken from Scripture starkly reveals the widespread biblical illiteracy that impacts both Christians and non-Christians alike.

When reading the Bible, particularly the Old Testament, it’s important to, at a minimum, understand that just because something is in the Bible does not mean that it is a law or a mandate or an expectation related to living a Christian life.

The Bible contains stories, poetry, prophecy, revelation, history, and more, including reporting on the cultures of the day. There are many cultural practices that the Bible references that God was not happy with and condemned. He hates but tolerates a lot of wrong-headedness from his beloved creation.

What is revealed through the arc of Scripture, from Genesis to Revelation, is God’s incredible love for and patience with His hard-headed and rebellious freewill-obsessed creation as He reveals Himself and His grace.

Third, peace is not being planted

The name of the organization that put up the billboard – Planting Peace – implies a desire to be peacemakers with those who hold differing positions.

Their website declares: “Our mission is simple: Peace. Planting Peace is a global nonprofit organization founded for the purpose of spreading peace in a hurting world.”

I fail to see how mocking someone plants peace. Frankly, the billboard does nothing but stir up more dissension, inflict hurt, and encourage hate. It is a form of subtle and pointed persecution.

To get a better idea of what a peacemaker is, consider the context surrounding the term in Matthew 5. Or just take a very close look at the life of Jesus.

One thing I noticed about the confrontations of those demanding marriage licenses from Kim Davis in her office is that, while she seemed to always remain calm and respectful, those on the other side of the counter were loud, hostile, insulting, and belligerent toward her. Their anger and disdain for her was palpable, not peaceful.

In fact, articles began to pop up that disparaged her past, attacked her character, and essentially sought to defame her. The attacks were personal and vicious. Again, this is a form of persecution.

Even as she has gone back to work without blocking the marriage licenses her deputies are giving out to same-sex couples, she is still being heckled and insulted. She has entered into a compromise to do the very thing others demanded she do – her job – and yet those annoyed with her faith-based stand are still not satisfied. They don’t want compromise, they want her out. They want blood, not peace.

Kim Davis engaged in peaceful, non-violent civil disobedience (a practice that has been respected and cherished in this country since its founding) and was willing to bear the consequences of her actions (jail) while those disagreeing with her are engaged in non-peaceful, borderline violent, rabble-rousing character assassination.

In other words, while demanding to be treated with dignity and respect, they are denying dignity and respect to Kim, or anyone who supports her. The billboard adds further insult to her injury while adding nothing of value or substance to the debate.

This is all to be expected

For Christians, while what is happening around us is dismaying, it is not surprising. Jesus warned that life for His followers would be tough, saying that, eventually, “Brother will betray brother to death, and a father his child; children will rebel against their parents and have them put to death” (Matthew 1:21, NIV). Then he reminds us, “If the world hates you, keep in mind that it hated me first” (John 15:18, NIV).

Paul cautioned, “The Spirit clearly says that in later times some will abandon the faith and follow deceiving spirits and things taught by demons” (1 Timothy 4:1, NIV).

True believers are in for some rough times.

In the meantime, unlike those who oppose God and our faith in Him, following the example of Jesus and empowered by the Holy Spirit, we must love our enemies, extend them mercy, show them respect, treat them with dignity, provide for their needs, and cover them with prayer (see Luke 6:27-38, NIV).

We must do this even if they put up an insulting, inaccurate, in-our-face billboard right outside our front door.

After all, love wins.

Is it possible to peacefully coexist with those with whom we disagree? Why or why not? If so, how can this be accomplished? Do you believe that faith is a “private thing” and should not influence one’s behavior in society? Why or why not? Please share your thoughts (respectfully) in the comments!!

=======
Two useful books on the biblical view of homosexuality: