Pivoting the premise: Choosing the preferred of various goods rather than the lesser of two evils

I’m choosing to reject the idea that any election (or debate over an issue or law) is nothing more than a forced choice between the lesser of two evils. Instead I’m choosing to look at these as opportunities to vote/advocate for the preferred of two or more goods.

Most men and women who hold or seek political office, regardless of party affiliation or philosophical bent, are intelligent, well-intentioned citizens. There are exceptions, but they usually get put out of office sooner or later, if they even make it into office at all.

Candidates arise from “We the people of the United States.”

We are the people

We are the people. The people are us. What we get in the way of government is what we choose.

Those who serve in elected and appointed offices arose from the midst of us.

Those elected were elected by us.

If candidates arise and get elected who are truly evil, then they arise because we allow them to and we choose them. And if they persist in office, they persist because of us.

We usually get what we ask for

The candidates who are elected get elected because, at least to some degree, they reflect our values, our desires, our intentions, our morals, our hopes, our dreams. They get into office because we view them as a means to achieve what we want; what we believe is best for ourselves and our country, state, county, or town.

If what we want is evil, then we will choose evil to represent us.

If what we want is good, then we will choose good to represent us.

I do not believe, on the whole, that any major party or serious candidate represents evil per se.

Rather, all candidates are generally good, intelligent, capable people with very different ideas as to what’s best for our country.

Most viewpoints have been shaped and are informed by intelligence and wisdom, as well as very different life experiences and worldviews.

That candidates willfully subject themselves to the horrific, abusive gauntlet of what we have turned political campaigns into in this country speaks volumes about the toughness, resilience, and perseverance of their characters and intellects.

We are the “other” side to them

To blast those who represent or support the “other” party, side, or viewpoint as evil, bad, dishonest, stupid, idiots, or worse, is to diminish ourselves, revealing our own character flaws. We’re worse than undisciplined children name-calling on the playground when we sling our own mud.

We need to stop demonizing each other and our candidates, even when they do it to each other. If candidates or those in office can't behave, we must set an example for them by being better.

To use profanity, insults, ridicule, distortion, belittling, and demeaning language is not to engage in dialogue, but rather to engage in bullying.

Such slamming and posturing achieves nothing positive. It merely shuts down intelligent discourse while fueling mindless anger.

To understand what this looks like and what it leads to simply consider the ugliness of  the mindless hate-driven tauntings and attacks of the Taliban, al Qaeda, ISIS, KKK, or any such hateful, terroristic, anti- or un-American group.

We are being presented with different sets of ideas and methods for governing our country. These ideas are different and different is not bad.

All viewpoints, generally speaking, are valid and worthy of our thoughtful consideration. We don’t need to agree with them, but we should at least respectfully consider them.

And then, for President and every other office up for grabs over the coming years, we each get to exercise our wonderful right and privilege to vote.

We need to respect each others’ choices and support those we place into office.

There’s a lot of whining that goes on regarding the failure of our elected politicians to get along and govern in a more bipartisan spirit.If we, as the governed for whom the elected work, can’t get along with our own friends, neighbors, relatives, and coworkers who are on the “other” side, why do we expect those we elect to behave any differently?

It’s time for “we the people” to start behaving the way we want those we elect to behave as they govern our country. It’s our country and our government and it reflects us to the world.

This means that when the person we voted for behaves badly or lies, or the party we align with acts without integrity, we need to call them out and hold them accountable. It’s not enough to merely point the finger at the foibles of the “other” side while excusing or whitewashing the same faults on “our” side. And it’s just as wrong to gloat when “they” slip up.

Oh, and calling for everyone to play nice, get along, and be reasonable while at the same time taking a swipe at your opponent is not cool. It’s simply hypocritical.

Check for logs & don’t be mean

Then, on any election day or in the midst of any debate, regardless of who wins office, we must remember: “Let every person be subject to the governing authorities. For there is no authority except from God, and those that exist have been instituted by God” (Romans 13:1, ESV).

Just because your candidate won or lost the election doesn’t mean you no longer are obligated to love your neighbor – who voted for the other guy – as yourself. As Paul reminds us, “If possible, so far as it depends on you, live peaceably with all” (Romans 12:18, ESV).

Exercise your conscience. Honor God. Love and respect your neighbor. Seek peace and justice for all. Be respectful to everyone. Keep the faith.

What do you think? Reposting this with edits seemed especially apropos given all the heat being generated over the RFRA issue in Indiana. Sadly, it seems the most hateful rhetoric is coming from those accusing RFRA supporters as being intolerant. And all Hoosiers are being painted as bigots by those trying to shout the law down. Much of the media isn’t helping either.  It’s okay to disagree, but it’s not cool to bully and abuse your opponents. Please share your thoughts and comment! Just please be nice. 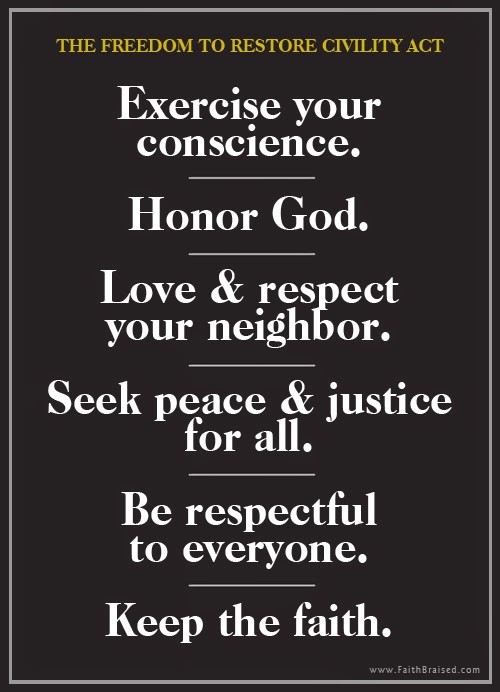