It’s becoming glaringly obvious that a person can get away with serial murder for years in plain sight if they use the right cover and the right weapon.

On December 14, 2012 in Newtown, 20 children, 6 school staff members, and 1 mother died. The shooter, a troubled young man, was immediately cornered and took his own life.

A memorial service was held and the President spoke. Many dignitaries visited the area.

Since the shooting, outrage has ensued surrounding gun laws with the insistence that “something” must be done.

There have been numerous in-depth media reports about the shooter and his family and, as soon as the next official report is released, there will be many more.

On April 15, 2013 in Boston, 1 child, 1 police officer, and 2 other adults died. One bomber is dead and one is in custody within a week of the incident.

A memorial service was held and the President spoke. VP Biden is attending the funeral of the police officer.

Since the bombing, outrage has ensued surrounding how we track potential terrorists with the insistence that “something” must be done.

And the reporting since the bombing has been non-stop, front page, and in-depth.

Reporters are even contacting relatives in Canada and Russia. Every tiny thread of information is being followed-up and reported in excruciating detail.

Over a period of several years, hundreds or potentially thousands of newborn babies and at least two young women were murdered in Philadelphia.

One man, insisting he is innocent, is on trial. His primary murder weapon was a pair of scissors. He had many accomplices.

There has been no moment of silence for the dead. No one is mourning the lost. No memorial service has been held. All the President will say is “no comment.” None of the dead got funerals.

Any outrage is pooh-poohed as misplaced or misinformed.

As far as anything in-depth being reported, most is merely a rehashing of snippets of the grand jury report or trial testimony.

No one is digging into the killer’s history, interviewing family, or following up on any leads beyond what is assumed to be obvious.

In Philadelphia, inside the building at 3801 Lancaster, “Dr.” Kermit Gosnell and his staff killed in plain sight for years.

Now, his victims are being sacrificed on the altar of political theatrics.

The media and abortionistas on both the pro-choice and pro-life sides are so determined to use the Gosnell case to make political hay, they are all deflecting attention away from the central truth:


Gosnell is nothing more than a greedy, sociopathic, misogynistic serial killer. He was able to abuse women, deal drugs, and murder his victims in plain sight by operating under the guise of offering abortions and other “medical” services.

That this is true is made plain in the very first sentence of the gruesome grand jury report that led to Gosnell’s arrest and indictment:

“This case is about a doctor who killed babies and endangered women.”

Not abortion, not legal, not medicine, not politics

There are three points that the abortionistas and the media need to get clear on:
All of this is made startling clear in the powerfully lucid grand jury report.

For decades, in plain sight, Gosnell got away with murder, abuse, and more while operating under the guise of offering legal, safe, medically acceptable abortions.

As a result of his ruse, he was ignored by the authorities and anyone else that could have put an end to the atrocities he and his staff were committing.

Now, by insisting that his case be held up as some bellwether for their causes, both the pro-choice and pro-life sides are in a way helping his defense by muddying the case with politics.

And everyone, including the prosecutor, is missing the point.

Already the judge has reduced the charges against Gosnell sending a subtle message to the jury that the remaining charges may not be as clear-cut as outlined in the grand jury report.

There’s a chance the jury will acquit.

After all, abortion is a legal medical practice in this country.

But, what Gosnell and his accomplices did was NOT abortion, NOT legal, NOT medicine, and should NOT be a political hot potato. 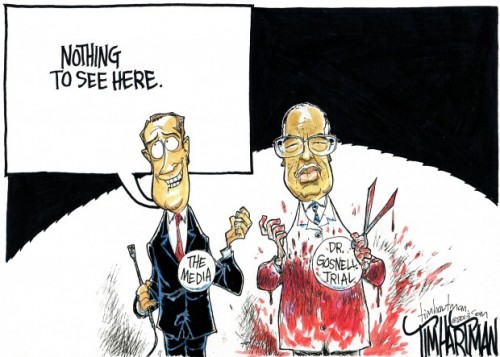 The legal difference between ending a late-term pregnancy and sustaining a live-born preemie baby is slim.

One doctor, quoted in a New York Times editorial, wrote an essay describing the ironic tension of performing an abortion and then “immediately running to deliver” a preemie:


“I thought to myself how bizarre it was that I could have legally dismembered this fetus-now-newborn if it were inside its mother’s uterus, but that the same kind of violence against it now would be illegal, and unspeakable.”

Whether you support or decry abortion, there is a thin blood-red line that separates the legal from the illegal.

Gosnell, his accomplices, and the “patients” in his “clinic” obliterated that line, killing with impunity.

Again, what he did wasn’t abortion, it was murder.

Otherwise, it was just malpractice.

So, what’s the point I’m driving to?

The pro-life and pro-choice abortionistas need to stop spinning and spewing their political rhetoric that’s making this story so radioactive no one wants to touch it.

The media must ignore the rhetoric and politics and start reporting on all the details of this story, following all the dangling loose threads treating it no differently than Newtown or Boston.

Gosnell was married at least three times, so go talk to the ex-wives and find out what they know. He has six children, so ask them how they feel about being raised on blood money. He came from the neighborhood where he had his “clinic,” so examine how he grew up to be a killer, preying on the people he claimed to care about. He made millions, so follow the money. He was investigated and raided for dealing in prescription drugs, so examine what’s happening on that side of the story.

Probably the single most significant factor that allowed Gosnell to get away with murder for so long was across-the-board ignorance:

Gosnell counted on ignorance to cover his crimes.

The only way to ensure such ignorance doesn’t allow another Gosnell to operate anywhere else in the country is for the media to report the story as broadly and deeply as they have the Sandy Hook shootings and the Boston bombings.

Those Gosnell murdered deserve nothing less.

Do you believe there should be more media coverage of this case? Why or why not? Are you aware of anything similar happening in your area?

Links to various articles about Gosnell: