The rabid elephant in the room that needs to die. Now!

My wife and I, both Jack Bauer fans, recently started revisiting the TV series 24. As with most shows or movies that you give a second look, I’m seeing things I didn’t notice before.

One big revelation this time around is that Jack’s most threatening enemy to his success was something that every office in America – yea, verily, around the world! – is infiltrated by.

While Jack was laying his life on the line out in the field engaging in fierce gun battles with terrorists and other bad guys, the people who were supposed to have his back were back in the office busily engaging in a kind of terrorism of their own: Office politics.

Seriously, think about it.

Had there been no office politicking going on, odds are that Jack would not have needed 24 hours to wrap up each season’s save-the-world plot line. He could have had a few bathroom breaks, a relaxing meal, and a nice night’s sleep.

He had to take the time to deal with people who were intent on hindering his efforts, trying to finagle their way into his job, demanding raises, nibbying into his personal life, jockeying to one-up one another, and on and on it went.

It is the rabid elephant lurking in every meeting room, office, and cubicle that desperately needs to be put down and shown no mercy.

Harmful to children and other life forms

Not the stuff that goes on in D.C., although it’s often sickening.

Rather, I’m referring to politics that take place where politics don’t belong: in offices, in churches, in all kinds of organizations where people are supposed to be cooperating, collaborating, serving, and innovating.

It’s usually labeled office politics or workplace politics. In this post, I’ll refer to it as OP.

Regardless of how you label it, it’s all about misdirection and the abuse of power.

Practitioners of OP (office politics) step on everyone, lie about co-workers, inflate their own value, take advantage of others, deceive, snipe, lay traps, withhold essential information, and generally create chaos.

Similar to the “fog of war” they seek to create a “fog at work” that disguises their own incompetence while painting others with a blackwash of fake inadequacy.

OP siphons the energies of a workforce away from the mission of the organization.

It’s costly and crippling. There is no positive value in office politics.

Those who actively practice OP are little more than Machiavellian misanthropes, office assassins, and productivity terrorists. 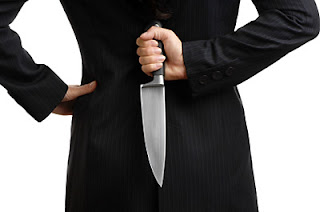 Oddly, there are some who laud OP as something useful, necessary, and constructive. These people are either woefully misguided naïfs or just plain ignorant of what OP is and isn’t.

Let’s clarify some things that are not OP tactics, but more the norm for proper etiquette in any workplace:

It’s important to discern the differences between abusive OP behaviors and positive workplace behaviors that are constructive. If it supports the mission of the business and benefits all, it’s usually a good thing. If it’s all about one person or a small group, that’s a red flag. 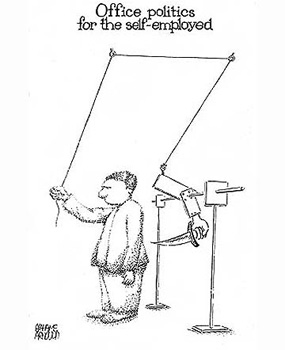 Why does OP exist? It’s a tangled, suffocating snare that foments from the compost of incompetence, narcissism, jealousy, laziness, vanity, fear, anger, arrogance, and the like.


A local columnist characterized one situation like this: “Safety director Flask has proved no more effective in his role. Constant scandal in the fire department, sloth and incompetence in the police department and a sorely stressed EMS department that remains without an identity have marked his tenure. How he has survived is beyond me, but it speaks to a certain political adroitness.”

Note that last sentence and the final two words. We all know someone who should not be in the position they hold yet cling to it, not because of any real job competence, but solely because of “political adroitness.”

OP involves creating a smokescreen to cloud incompetence so a person can maneuver around those who are actually good at real work. These incompetents will also steal the ideas of others and claim them as their own.

When I went to work for a company in Indianapolis, I was warned by coworkers about an HR director who was described as a snake. Because of my position, I’d need to work with him on a regular basis.

Naively I took the warnings with a grain of salt and was determined to hold him “innocent until proven guilty.”

We were handed an important project for the CEO. As it turned out, I ended up doing most of the development. I slowly figured out it was because the HR director was clueless as to how to proceed. However, when we were in a meeting with senior executives to discuss our process and progress, he quickly took credit for everything!

I was stunned and speechless. When I later tried to confront him, which is no easy task for an introvert, he slithered right through my objections with slippery, snake-ish charm. I avoided being connected with him as much as possible after that.

Many who rise to management positions do so by being tactful bullies. They push people out of their way in a most charming manner. It’s very confusing to the pushed. But it’s merely a matter of manipulation.

“Betty” (not her real name) was a senior manager who seemed to enjoy putting employees through the wringer just for the fun of it.

About every six months or so, Betty zeroed in on an employee and always managed to find something she viewed as amiss with their work, even if she had to make it up. Often, it wasn’t clear to the employee what the issue was and so correcting the “wrong” behavior was almost impossible, especially when it wasn’t real. But the fact that their job was on the line was always very real.

Betty never confronted these employees directly, but worked through the managers reporting to her. This meant both the manager involved and the employee were squeezed.

Sadly, Betty wielded a fair amount of power and no one stood up to her, even though everyone (except those above her) knew what she was doing and that it was simply cruel. They knew opposing her would make them a target.

Why was Betty cruel? From all appearances it seemed she enjoyed being able to throw her weight around and was insecure as a manager. This left her with a warped sense of how to manage; all she knew was manipulation and control.

As a result, over the years, several very competent, productive employees left the company. Clearly, this impacted the company’s bottom-line as well.

These are only two examples. I’m sure you can think of several on your own (Maybe share them in the comments section below?).

The bottom line is that OP does horrible damage to people and organizations.

Kill it before it spreads

I’ve watched OP played by senior executives, investors, and others at the top of the heap with their actions actually costing them and their organizations hundreds of thousands of dollars. Some even blatantly acknowledged OP was a game and thought it was fun to create chaos with total disregard to the pain they created in their own organizations.

These same individuals then forced the slashing of budgets and downsized people out of the organization to cover the losses they caused. Yet, they never acknowledged they were the real sources of the problems, and complained vociferously about everyone else’s perceived failings.

Talk about a morale killer!

OP brings down morale, encourages unethical behavior, reduces productivity, destabilizes the work environment, saps the energies of employees, opens the organization to risk, and significantly cuts into the bottom line.

Worse, OP deflects your organization away from its purpose and away from serving your customers or constituency.

OP undercuts your mission and siphons off passion.

How can you stifle OP? Here are a few suggestions:

You've got to work to avoid being seduced by the lie that office politics is harmless or even a reasonable element of any organization. It isn’t.

As Jack Bauer would say, kill it before it spreads. Now!

Read more in this post:  Eschewing Office Politics to be OK at work

Here are two articles from the same publication that present opposing views on OP (office politics). Frankly, I believe Samuel Bacharach’s pro article isn’t actually addressing true “office politics.” Eric V. Holtzclaw, however, offers additional good tips on the con side. You can judge for yourself:
Here’s an example of one executive working to reduce office politics:
Here’s another take on getting OP out of the office. Note the struggle to define “good” and “bad” OP. I think we need to develop a different term for office politics; something like “workplace backstabbing” perhaps?

This video is a funny metaphor that graphically portrays the real violence of office politics. Don’t be fooled by the humor.