I’m always surprised when someone insists that being able to write well is not as important as it used to be. This astounds me when I hear it from another communication professional.

The ill-wrought reasoning lies in the fact that we do so much communication now with technology and somehow this lessens the need for writing well. Rather, it’s more important to understand how to use the technology, gather data, etc. to build effective communication.

Talk to me - smartly

Just recently in fact I engaged in a brief cuff up with someone over this issue. I took my soapbox stand proclaiming that being able to write well is essential to being an effective communicator. Their retort was, “What about speaking? As in speeches?” Even then, I rebuked, great speeches are first well-written. Another communicator overhearing this mini-debate chimed in with the popular mantra, “But communication is really a conversation among the participants,” as if this would knock me off my box. It didn’t.

If you are inept with the language as a writer, you won’t be better as a lone speaker giving a speech or as a participant in a conversation.

Writing well entails being able to think and reason well. It exhibits not only clarity in communication, but a concern and interest in the proper use of language and thought.

Distilling the essence of a message into an effective 140 character Tweet takes skill and understanding. Just ask any ad copywriter or poet! Using fewer words to get across a big idea is daunting. It's not just about using fewer words. Not everyone can do it.

But being able to write well can also save politicians from public embarrassment.

Thems be the breaks I a reckons

Just a couple of days ago, a very brief item appear in The Plain Dealer. The new Cuyahoga County Executive, Edward (Ed) FitzGerald, was putting down his foot on his staff regarding the proper spelling and capitalization of his name. It appears the “g” was being lower-cased frequently. Given that his name appears on numerous legal documents, it is essential that it be spelled correctly.

I agree. Any person having their name applied to a document deserves to have it applied correctly.

Trouble arose, however, over the errors in the memo that was sent out addressing the issue. Particularly the line that read: “I have also be informed to please return any documents that does not conform with his instructions to the sender.” 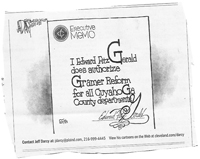 The very next day, the editorial cartoon in The Plain Dealer addressed the issue brilliantly, stating, “I Edward FitzGerald does authorize Gramer Reform for all CuyahoGa County departments.”

For those outside of Ohio who are not aware, Fitzgerald is the first County Executive. It’s a new form of county government which was enacted to replace and clean up an immense case of corruption that has brought down dozens of private and public citizens. So, everything FitzGerald and the county council do is under a microscope. Everything.

Even without the added scrutiny, taking care that official public documents are crafted intelligently and accurately should be the norm. While not the case with the memo cited, sloppy writing could cost the county thousands of dollars because of an unclear, ambiguous, poorly written document that is challenged in court.

In addition to damaged clarity and broken understanding, bad writing can cost taxpayers money! And it can put a ding in a public official’s reputation.

So, yes, being able to write well is an essential skill for effective communication. If the person who wrote this egregious memo was not taught proper writing in school, they need to go back and smack their teachers. They were cheated!

And Ed, you need to hire a writing coach for your staff.

Disclaimer: Any typos or supposed errors appearing in my blogs are intended as entertainment and are not to be considered as a bad refection on my writing skills.