How to avoid news release hell with righteous writing 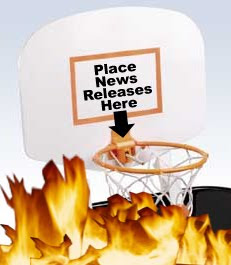 If you are “in the biz,” as they say, then you’ve heard how pointless it is to issue a news release. In this glittering age of social media, twitterati, and digitized content, news releases are viewed like cavemen at a cocktail party – clumsy and out of place.

After all, nobody reads news releases anymore. Right?

Okay, maybe they aren’t read, but they are at least glanced at. And that glance could turn into a bit of publicity gold as opposed to a wad of paper in a game of trashcan swish.

How do you give your news release a snowball’s chance in quick-glance hell? Simple. You start with good, righteous writing.

Right now someone is already head-arguing with me that a good news release needs a lot more than good writing. Quiet your inner spat-man for a minute and bear with me.

Now, think: what are the elements of good writing? Hint: they’re the same elements that make a good news release.

Good writing, in a nutshell, is clear, concise, complete, and – this is important – clever. Good writing gets your message delivered. Period.

The most important element is to be clear. Being clear means very simply BEING CLEAR! Did you get that?

Being clear means avoiding jargon, tech-speak, corporatese, and anything else that makes your news release read like it was written by a robot.

The following paragraph was in a news release that recently landed in my inbox. The only reason I read the whole release was because it was so horrendously awful, especially this graf. I’ve eliminated specific company names to protect the clueless. The bracketed comment is mine:


“Due to rapidly churning communication technology and seismic shifts in the book market distribution landscape – from the Internet to eReaders and the iPad to individual book print-on-demand capability – publishers expect authors to take more responsibility for the development, promotion, and sales of their books. [Deep breath!] COMPANY will help publishers, agents, ministry partners, and Christian authors adapt to these changes with dexterity. It combines the experience and vision of COMPANY publishing executives with the integrated marketing and technology expertise of BUSINESS GROUP digital natives. COMPANY will provide authors with brand counseling, editorial direction, research capabilities, marketing strategy, Internet and social media presence, and a comprehensive portfolio of publishing assistance.”


The writing, in general, sucks. Worse, I’m not really sure what this organization is trying to accomplish. The word “dexterity” was a major tripping point, but “digital natives” is a total cliff over which all meaning is lost. And then there are those long gobbledygook sentences. It’s 107 words and only four sentences.

There’s nothing clear about this graf or, sadly, the entire release. Forget concise, too. As far as being complete, I can’t really say because I have no clear idea what this release is talking about, so I don’t know if anything is completely covered or not. My gut sense is not even close.

Now, as for clever, there were some lame attempts. For example, the release listed key personnel of this new venture. One person is tagged a “Social Media Marketing/WOM/Publicity Evangelist.” I’m assuming WOM means “word of mouth." And “evangelist?" Really? Didn’t these kinds of cutesy titles get tossed a decade ago? If I were meeting with this guy, I’d have a hard time taking him seriously once I glanced at his business card.

Jargon is sprinkled generously throughout the release, all in a bid toward cleverdom. However, clever that isn’t clear is just crap. And jargon is never clever. Remember that.

The website of this new venture is also an attempt to be clever by being minimalistic. Fail! It only succeeds in being pointless and annoying.

Now I guess it’s time for me to offer some helpful tips for making your news release successful. Okay, here goes:
Sorry, that was a little self-serving. I’m a freelance writer always on the prowl for new business. Email me.

Let me try again. Here are some tips:


And speaking of reality, the truth is that news releases are not dead or useless. At least not when they’re carefully crafted and well written. Done right, a news release can be effective in communicating your critical messages to your constituency. Create yours thoughtfully and engagingly.

Okay, now I can insert the blatant appeal for business: